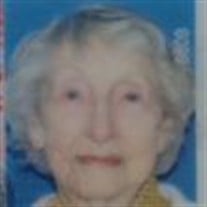 Ada Josephine “Jo” (Riddles) Jaggers 92, was born to Albert Riddles and Ola (Lankford) Riddles on July 27, 1922 in Kusa, Okmulgee County, Oklahoma and passed away Friday, February 6, 2015 at her home in Muskogee County, OK about 8 miles from Gore, OK with her family by her side. Jo attended Kusa schools and later moved to Binger, OK where she graduated high school. Her career started at the Fort Sill Commissary as a checker and she worked her way up to produce manager. Jo married Joe Tilley prior to WWII, he was in the Army Air Corps at the time of the bombing of Pearl Harbor. Thirty days later, he was sent to Burma. Jo moved to Centerton, AR to live with her mother Ola Riddles while her husband was overseas. Her son Mark Tilley was born near Centerton in Bentonville, AR. Joe Tilley was injured in Burma and was sent home. Once he was able, Joe joined Jo and a daughter Suzanne Tilley who was born in Abilene, TX. After WWII Jo received a divorce from Joe Tilley and married Jack Jaggers in 1947. Her third child Thomas Jaggers was born in Lawton, OK in 1948. During these times, Jo was a homemaker for her family. When Jack and Jo retired from the Lawton area they built a beautiful home in Muskogee County on approximately 40 acres near the Gore area. Jo and Jack spent many hours stacking rock for the fence and pillars that grace the home’s entrance. Jo was a pioneering spirited person, always willing to do whatever it took to succeed. She was quite the cook and enjoyed cooking her fresh vegetables from her garden for all of her friends and family. The farm was her joy in life and she spent many hours gardening, mowing, and working around the farm. She was a member of the Crafters of Tenkiller where her emphasis was on dried flowers. Jo loved spending time with her family and friends. Jo was preceded in death by her husband; Jack Jaggers, a son; Thomas R. Jaggers, and a brother; Milton “Jack” Riddles. She is survived by her son; Mark O. Tilley of Sebastian, FL, daughter; Suzanne J. Wilson of Wagoner, OK, sister; Margie Ray of Gore, OK, grandchildren; Jack A. Wilson and Julie A. Wilson of Lawton, OK, Mark Alan Tilley of Grand Junction, CO, Ann Marie Murphy of Monroe, NC, Jennifer Jaggers of McAlester, OK, and Scott Jaggers of Dallas, TX, daughter-in-law; Cheral Jaggers of Sentinel, OK, six great-grandchildren, her dog; Bo, many nieces, nephews, and a host of friends. A graveside service celebrating the life of Ada “Jo” Jaggers will be held Tuesday, February 10, 2015 at 11:00 AM in the Fort Gibson National Cemetery in Fort Gibson, OK with her son Mark Tilley officiating. The family of Ada “Jo” Josephine Jaggers has entrusted her services and burial to Clifford D Garrett Family Funeral Home in Fort Gibson, OK 918-478-2555. Online condolences may be made at clifforddgarrettfamilyfh.com

The family of Ada "Jo" Josephine Jaggers created this Life Tributes page to make it easy to share your memories.

Send flowers to the Jaggers family.