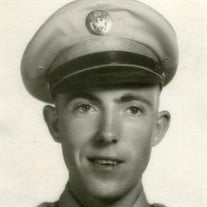 Alfred William Goad, 84, was born Wednesday, July 9, 1930 in Muldrow Oklahoma to Mack Thomas Goad and Myrtle Lee (Dix) Goad and passed away Wednesday, December 3, 2014 in his hometown of Muskogee with his family by his side. Alfred graduated High School from Braggs, Oklahoma, and continued his education at Bacone College in Muskogee. After college he started his career at Corning Glass in Muskogee, retiring after 30 plus years. Alfred was a member of the Corning Glass Union and was the St. Louis Cardinals biggest fan. If the Cardinals were playing, you could count on him watching the game. Every year Alfred had a beautiful garden that he would share the products of his hard work with everyone. Spending time with family was his greatest love, especially his great grandchildren. Alfred was quite the domino player and spent many hours perfecting his domino skills with his second family at the Main Street Office. Alfred was preceded in death by his parents, sons; David Lynn Goad and Mike Bolin, brothers; Leon Goad, Louie Goad and Bobby T. Goad, sisters; Gertrude Hipp, Wanda Collins, Hazel Baird and Bobbie Lou Goad. Those left to cherish Alfred’s memory are, his daughter; Annette Swafford of Muskogee, OK, brother; Kenneth Goad of Oktaha, OK, sisters; Norma Edwards of Coweta, OK and Clara Perry of Warner, OK, seven grandchildren, 17 great-grandchildren, and many nieces, nephews, cousins and many friends. A celebration of Alfred’s life will be held Monday, December 8, 2014, at 10:00AM in the Clifford D Garrett Family Funeral Home Chapel with Brother Mike Shelton officiating. Interment will follow at the Fort Gibson National Cemetery with Jesse Goad, Chad Fields, Kendall Goad, Kenny Goad, Adam Bolin and Marcus Bolin serving as casketbearers. Honorary casketbearers are Johnny Loman and Joe Goad.

Alfred William Goad, 84, was born Wednesday, July 9, 1930 in Muldrow Oklahoma to Mack Thomas Goad and Myrtle Lee (Dix) Goad and passed away Wednesday, December 3, 2014 in his hometown of Muskogee with his family by his side. Alfred graduated... View Obituary & Service Information

The family of Alfred W Goad created this Life Tributes page to make it easy to share your memories.

Send flowers to the Goad family.