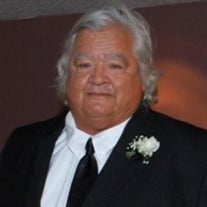 Alvin Louis McIntosh, 77, was born November 23, 1942, in Talihina, OK to Carl and Marie (Robison) McIntosh and passed away at his home in Fort Gibson on Sunday, October 4, 2020. Alvin grew up and attended school in Talihina and met Vera Alene Burnett, who he married on February 7, 1960. Throughout their marriage, they lived in Oklahoma City, Okmulgee, Muskogee, and eventually settled in Fort Gibson to raise their family near the Oklahoma School for the Blind. They had five children: Louis, James, Kenneth, Tracey, and Alma. Al and Vera enjoyed 52 years of marriage until Vera’s death in April, 2012. Throughout his life, Al was known by many names. Hometown friends and family knew him as “Brownie”. Many knew him as “Big Mac” from his days in the Fort Gibson CB Club and coaching little league baseball. He was also known by many as “Big Al”, either through his many years in the construction industry or his days fishing the east and west walls at the Fort Gibson Dam and throughout Oklahoma. Al attended the diesel mechanic program at Okmulgee Tech. He had a long and respected career in the construction industry as a heavy equipment operator. Al was very well known, far and wide, for his superior ability as a track hoe and backhoe operator. He worked for Zachary Construction, S&S Construction, and others, but enjoyed most of his career with Cook Construction in Fort Gibson. Al loved junkin’ and reselling everything from cast iron and glass collectibles to lights. For a time, he also owned and operated Big Al’s Fishin Shak and was well known for his fine craftsmanship on his custom wrapped fishing poles. In recent years, Al wasn’t able to get around too well, but still enjoyed visiting with old friends. He also renewed his relationship with Christ and enjoyed watching and listening to Shepherd’s Chapel services and others. Al was preceded in death by his wife, Vera; son, Tracey McIntosh; parents, Carl and Marie McIntosh; sister, Corrine Sabala; and brother, Carl McIntosh. Those left to cherish his memory are sons, Louis McIntosh of the home; James McIntosh of Fort Gibson; Kenneth McIntosh and wife Sandi of Hitchita; daughter, Alma Pickle and husband Charlie of Dover; grandchildren, Cory McIntosh and wife Corrina, Kenny McIntosh and fiancé Jessica, Bailey McIntosh and Jesi Pickle; sister, Stella Dennis and husband Chester of Clayton; six great grandchildren, Chase, Rylie, Emma, Abby, Gunner, and Reagan; three brothers-in-law, Verlon, James, and Mikel Burnett; three sisters-in-law, Iza Holt, Armenda Pearson, and Sally Burnett; along with many nieces, nephews, cousins, and many friends. In lieu of flowers, the family has requested donations in his memory to Kid’s Space (400 Court St, Muskogee, OK 74401), CASA for Children (419 W Broadway St, Muskogee, OK 74401), or Shepherd’s Chapel Church (102 8th Ave NE, Gravette, AR 72736). A service Celebrating Alvin’s life will be 11:00AM Friday, October 23, 2020 at Three Rivers Cemetery in Okay, OK with Brother Don Reed officiating. The family of Alvin Louis McIntosh has entrusted his care, service and burial to Clifford D Garrett Family Funeral Home, Fort Gibson. 918-478-2555. Online condolences may be left at clifforddgarrettfamilyfh.com

Alvin Louis McIntosh, 77, was born November 23, 1942, in Talihina, OK to Carl and Marie (Robison) McIntosh and passed away at his home in Fort Gibson on Sunday, October 4, 2020. Alvin grew up and attended school in Talihina and met Vera Alene... View Obituary & Service Information

The family of Alvin 'Big Al' Louis McIntosh created this Life Tributes page to make it easy to share your memories.

Send flowers to the McIntosh family.