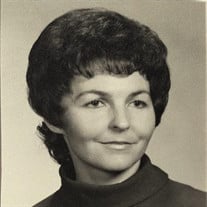 Anita Dolores (Irwin) Lehman was born September 29, 1932 in Elkhart, Kansas to Paul A. Greaser and Bernice Elizabeth (Ammann) Greaser and peacefully passed away Friday, December 27, 2019 in Fort Meyers, Florida. After the death of their second daughter, Bernice and Paul divorced. Bernice later married Ted O. Irwin who adopted Dolores. Dolores spent her childhood in Kansas playing the clarinet and twirling in high school. At that time her father was managing a movie theater. Dolores was working in the theater when she met and fell in love with George Donald Lehman. After graduating from high school, she attended Kansas State University, but after one semester she dropped out and married George on March 31, 1951 in Great Bend, Kansas. George worked for Seismograph Service Corp., exploring potential oil fields. They never lived in the first house that they bought. They purchased what would be today a small travel trailer and moved from work site to work site. George would come home after work, hook up the trailer and drive through the night with Dee following him in their car. Occasionally George would begin to weave the trailer back and forth to keep Dee awake. As their first two sons grew to school age, they decided to settle in Muskogee, Oklahoma. They purchased a home that they actually lived in and soon added a third son to their growing family. They attended Trinity United Methodist Church where Dee was president of the Women's Society of Christian Service. Dee was active in the church and community. As her sons grew, she took up cosmetic sales and then sold real estate. She eventually received her broker's license and opened her own office. When George retired, they moved to Fort Myers on their trawler where they lived aboard for about a year. They built a home in Fort Myers and took several trips on a succession of boats and RV's seeing many parts of the United States and the Bahamas. After many happy years of marriage, George died in 2008. She then met and fell in love with Jesse Knotts whom she married on August 27, 2012 in Wagoner, Oklahoma. They have enjoyed their life together in Fort Myers until her death. During the final year of her life step-daughters Deb and Diane have cared for Dee and Jesse doing shopping, cooking, providing transportation and personal care until her death on December 27, 2019. She is survived by her husband; Jesse Knotts of the home; brother, Dennis Irwin and wife Donna of Sun City West, AZ; sons, Donald Lehman and wife Phyllis of Oklahoma City, OK, Kenneth Lehman and wife Cindy of Muskogee, OK, Gary Lehman and wife Sally of Fort Gibson, OK; step-daughters, Deb Wilson (John) of La Belle, FL., Diane Hagewood (Barry Gose) of Bunnell, FL., Kathy Growcock of Wolcottville, IN., Karen Criswell (Eric Bortner) of Rome City, IN; numerous grandchildren; great grandchildren and many friends. A memorial service Celebrating Dee’s life will be held 10AM Tuesday, January 21, 2020 at Clifford D Garrett Family Funeral Home Chapel in Fort Gibson, OK with her son Donald Lehman officiating. Committal prayers and inurnment will follow at the Fort Gibson National Cemetery, Fort Gibson, OK. The family of Anita Dolores Lehman has entrusted her service and inurnment to Clifford D Garrett Family Funeral Home, Fort Gibson, OK. 918-478-2555. Online condolences may be left at clifforddgarrettfamilyfh.com

The family of Anita Dolores "Dee" Lehman created this Life Tributes page to make it easy to share your memories.

Send flowers to the Lehman family.