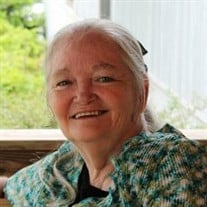 Barbara Sue Isham, 70, of Braggs was born April 29, 1948 in Batesville, Mississippi to Jake and Georgia (McKinney) Tacker and entered Heaven’s Gates on Monday, August 20, 2018 in Tulsa, OK. Barbara grew up in Mississippi where she received her formal education. She met and later married the love of her life Tracy Alvin Isham on May 25, 1972 in Fort Smith, AR. They were happily married for 46 years 2 months and 26 days. Barbara had a servant’s heart. She was a member of the American Legion Ladies Auxiliary and was an assistant cook for the Braggs Community Dinners. A faithful follower of Jesus Christ, she was a member of the Gum Springs Community Church. She was a past member of the Braggs Pentecostal Holiness Church. Barbara’s passion in life was her family, her church family and her community family. Barbara loved to sing songs of praise at many different churches and could always be heard singing anywhere she was, and was even heard singing in a restaurant. Barbara was preceded in death by her parents; a baby brother; grandparents; two sisters in laws and her first husband, J.W. Jones. Those left to cherish her memory are her husband: Tracy of the home; daughters; Carneca Prichard and her husband Kevin of Braggs, OK, Melissa Kimbrough and her husband Bobby of Ozark, AR; sons, Carl Jones and his wife Audrey of Cleveland, MS, Tracy Isham Jr. and his wife Paula of Sallisaw, OK, Jeff Isham and his wife Nicole of Braggs, OK, 15 grandchildren and 18 great grandchildren with 2 more on the way, church family and many friends. A visitation will be held Sunday, August 26, 2018 at Clifford D Garrett Family Funeral Home in Fort Gibson with family receiving friends from 2PM-4PM. A celebration of Barbara’s life will be 12PM Monday, August 27, 2018 in the Chapel at Camp Gruber, Braggs, OK with Pastor Cletus Jones and Pastor Jack Carner officiating. (Everyone must bring a photo ID to enter the gates of Camp Gruber). Committal prayers and interment will follow in the Fort Gibson National Cemetery with Carl Jones, Tracy Isham Jr, Vernon Stacy, Kevin Prichard, Troy Chisum and Keith Byrd serving casket bearers. The family of Barbara Sue Isham has entrusted her services and burial to Clifford D Garrett Family Funeral Home, Fort Gibson. 918-478-2555 Online condolences may be left at clifforddgarrettfamilyfh.com

Barbara Sue Isham, 70, of Braggs was born April 29, 1948 in Batesville, Mississippi to Jake and Georgia (McKinney) Tacker and entered Heaven&#8217;s Gates on Monday, August 20, 2018 in Tulsa, OK. Barbara grew up in Mississippi where she received... View Obituary & Service Information

The family of Barbara Sue Isham created this Life Tributes page to make it easy to share your memories.

Send flowers to the Isham family.