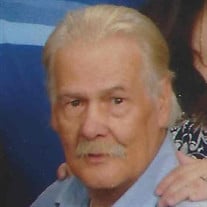 Benjamin Randolph Parsons, 74, of Catoosa, was born October 17, 1947 in Springdale, AR to Benjamin F. and Bethel L. (Westmoreland) Parsons and peacefully passed away Wednesday, December 8, 2021 at home with his loving family by his side. He grew up in California and later in life moved to Oklahoma. In February of 1967, Benjamin enlisted in the United States Army during the Vietnam War and was honorably discharged in February of 1969. Benjamin worked as a machinist for Oklahoma Interpak for over 25 years, which is also where he and Linda K. Pritchett met. He and Linda married on May 29, 2001 in Fayetteville, AR. Together they spent 20 years, six months and ten days making lasting memories together. Benjamin enjoyed bowling, gun collecting and trading, target shooting, watching and attending car races, playing video games, and spending time with family and friends. Benjamin is lovingly survived by his wife, Linda of the home; daughters, Melissa Dougherty and husband Allen of Tulsa and Rashelle Garcia and her children of CA; grandson, Jasper Dougherty of Tulsa; brother, Steve Parsons of CA; extended family and many friends. He was preceded in death by his parents; and two brothers, Wayne and Chris Parsons. Services for Ben will be 12:30PM Friday, December 17, 2021 at the Fort Gibson National Cemetery. Military honors will be observed. The family of Benjamin Randolph Parsons has entrusted his care, service and cremation to Clifford D Garrett Family Funeral Home, Fort Gibson, OK. 918-478-2555. Online condolences may be left for the family at clifforddgarrettfamilyfh.com

Benjamin Randolph Parsons, 74, of Catoosa, was born October 17, 1947 in Springdale, AR to Benjamin F. and Bethel L. (Westmoreland) Parsons and peacefully passed away Wednesday, December 8, 2021 at home with his loving family by his side. He... View Obituary & Service Information

The family of Benjamin R. Parsons created this Life Tributes page to make it easy to share your memories.

Send flowers to the Parsons family.