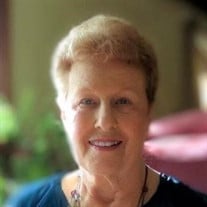 Beverly Ann (Rittenhouse) Johnson, 84, passed away on Saturday, December 7, 2019 at the Hilliard Lifecare Center, Hilliard, Florida. She was born July 26, 1935 in Pampa, Texas to Paul and Helen Berry Rittenhouse. Beverly attended many schools due to her father's work with Cabot Construction, but she graduated high school in Franklin, Louisiana in 1953. After graduation, she entered nursing school at Northwest Texas Hospital in Amarillo, Texas where she graduated as an RN in August of 1956. She and Tom Johnson were married on December 23, 1955 and after her graduation, they began their travels with the U.S. Air Force. To this union 4 children were born; Brodie (Patty) Johnson, of Bryceville, FL; Garner (Gwen) Johnson, of Braggs, OK; Lori (Casey) McGinty, of Nashville, TN and Darrin Johnson, of Lansing, MI. After Tom's retirement from the Air Force in 1974, they settled in Braggs, OK. Beverly resumed her nursing career at the VA medical center in Muskogee, OK, where she worked for 21 years until retiring in July 1995. After Tom died in 1999, she began going to Florida to spend winters with her son, Brodie, and his family. In 2005 she sold her home in Braggs and moved in with Brodie and his family in Bryceville, FL. Beverly was a loving wife, mother, grandmother, and great-grandmother. She enjoyed homemaking, sewing, crocheting, gardening, and reading. Her passion for flowers was known to all. Beverly was a member of Dinsmore Baptist Church. She is survived by her 4 children; 2 sisters, Muriel (Warren) Thomas and Lois (Jim) Jones; 3 nephews, Paul Thomas, Tony Jones and Jeff Jones; 9 grandchildren, Amanda Johnson, Alyssa (Steve) Heinze, Stefanie (Daniel) Camfield, Kavette Johnson & fiancé Bobby Kelly, Emily (Stuart) Doka, Alaina (Earl) White, Zachary McGinty, Caeleigh McGinty, and Savannah Johnson; and 4 great-grandchildren, Maliek Hill, Tobias Camfield, Winifred Doka, and soon-to-be Nathaniel Camfield. Beverly was preceded in death by her parents; grandparents and husband. Visitation will be held from 5PM-7PM Friday, December 13, 2019 at Clifford D Garrett Family Funeral Home, Fort Gibson. A Celebration of Beverly’s Life will be 10AM Saturday, December 14, 2019 in the Braggs First Baptist Church. with Reverend Earl Cobb officiating. Committal prayers and interment will follow at South Bethel Cemetery, Braggs, OK with Brodie Johnson, Garner Johnson, Darin Johnson, Casey McGinty, Zack McGinty and Maliek Hill serving as casket bearers. She will be laid to rest beside her husband Tom. The family of Beverly Ann (Rittenhouse) Johnson has entrusted her care, service and burial to Clifford D Garrett Family Funeral Home, Fort Gibson. 918-478-2555 Online condolences may be left at clifforddgarrettfamilyfh.com

The family of Beverly Ann Johnson created this Life Tributes page to make it easy to share your memories.

Send flowers to the Johnson family.