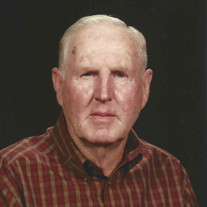 Billy Max Andrews was born on December 21, 1936, in Seminole, Oklahoma, to Willie Lee and Mina Andrews. He died on October 25, 2020, at his home in Fort Gibson at the age of 83. Bill graduated in 1955 from Fort Gibson High School and spent the majority of his life as a resident of Fort Gibson. He loved his home town and functioned as a town inspector for several years. Bill was skilled at working with his hands and with problem solving, and he enjoyed a long career in construction, working for several construction-based companies including Lindsey Construction, Manhattan Construction, and Holloway, Updike, and Bellen Consulting Engineering. At one time, he owned and successfully operated his own construction companies and was highly respected by both his employees and clients. One of his proudest professional accomplishments was having served as Project Manager for the Oklahoma Capitol Dome project in 2002. In his earlier years, Bill enjoyed several hobbies, among them aviation, and in the 1970s, he became a pilot and flew his own small plane. After his retirement, he developed a love for woodworking, and he created many beautiful pieces of wooden art that he generously shared with family and friends. Bill enjoyed riding four wheelers and traveling to many places during his lifetime, and he was especially proud of having been able to visit the Holy Lands a few years ago. He enjoyed doing yardwork and took meticulous care of his lawn and gardens until shortly before his death. Bill was never idle and was an energetic and excellent provider for his family. He was well known as an honest, trustworthy man of integrity who was quick to help a neighbor or volunteer at his church. Bill was a dedicated Christian and was a lifelong member of the First Baptist Church of Fort Gibson. Bill is survived by his wife of 41 years, Euleta, of the home; his children Tammy Shrum and husband Dwayne of Oklahoma City, Beth Brannon and husband Doug of Fort Gibson, Max Andrews and wife Shelli of Cincinnati, Ohio, and Becky Berkenbile and husband Mike of Fort Gibson; stepdaughter Valeta First and husband Bernard of Oklahoma City; eleven grandchildren; eight great grandchildren; and a host of extended family and friends. He was preceded in death by his parents; a son, Stanley Mark Andrews; a grandson, Grant Shrum; and a brother, Weldon Andrews. Viewing will be 12PM-7PM Wednesday, October 28, 2020 at Clifford D Garrett Family Funeral Home in Fort Gibson. A service celebrating Billy’s life will be held 1PM Thursday, October 29, 2020 at the Fort Gibson First Baptist Church with Reverend Don Blankenship officiating. Committal prayers and interment will follow in the Fort Gibson Citizens Cemetery with Tom Panter, Art Crittenden, Phil Wood, Kyle Shrum, Michael First and Andy Brannon serving as casket bearers. The family of Billy Max Andrews has entrusted his care, services and burial to Clifford D Garrett Family Funeral Home, Fort Gibson. 918-478-2555. Online condolences may be left for the family at clifforddgarrettfamilyfh.com

Billy Max Andrews was born on December 21, 1936, in Seminole, Oklahoma, to Willie Lee and Mina Andrews. He died on October 25, 2020, at his home in Fort Gibson at the age of 83. Bill graduated in 1955 from Fort Gibson High School and spent... View Obituary & Service Information

The family of Billy M Andrews created this Life Tributes page to make it easy to share your memories.

Send flowers to the Andrews family.