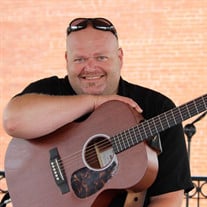 Billy Boyd Arnett was born November 28, 1974, to Billy Glen Arnett and Linda Jean Arnett in Muskogee, Oklahoma. He left this earth unexpectedly on May 11, 2022. He attended Fort Gibson Schools all of his school years, graduating in 1993. Billy enjoyed anything outdoors to include hunting, fishing and shooting guns. His passion was music and creating The Billy Arnett Band. He had been a musician for over 30 years. His band played locally and beyond, serving as a part of any benefit that was asked of him to attend and then some. He wrote his music with heart and soul and could captivate an audience with his stage presence and humor like no other. If you ever attended one of his concerts, you’d remember it. Billy was everyone’s friend. He radiated kindness, compassion and always had a smile to share. His greatest accomplishment were his boys, Garrett and Briston. They were his life. He was a dad first and foremost and his boys were loved beyond belief. He was their Superman. Billy taught his boys everything they know about being men. He taught them how to make a joke, how to take a joke and more importantly, how to take it seriously when it was no longer funny. He was everything in a man that they could look up to. His greatest title to date was “Papa” to his precious grand babies, Brooks Wayne, Brynlee Mae and little Baylor Boyd arriving in July. Billy was preceded in death by his dad, Billy Glen Arnett. Left to cherish his memory are his sons, Garrett Arnett of Broken Arrow, Briston Arnett of Broken Arrow; their mother, Lisa Jackson of Broken Arrow; grandchildren, Brooks Wayne Arnett, Brynlee Mae Arnett and Baylor Boyd Arnett, also of Broken Arrow; mother, Linda Arnett of Fort Gibson; sister, Carol Farguson of Fort Gibson; niece, Kiersten Farguson and her son, Cash Robbins of Muskogee; niece, Chelsea Mills and her children, Kalaya Mills, Madison Miles and Orlando Wilson Jr. all of Fort Gibson. Billy leaves behind a host of extended family and many friends. A visitation will be held from Monday, May 16, 2022, with family receiving friends from 5PM-7PM at Clifford D Garrett Family Funeral Home in Fort Gibson, Oklahoma. A Celebration of Billy’s life will be 2PM Tuesday, May 17, 2022, at the Oklahoma Music Hall of Fame in Muskogee, OK with Reverend Don Jones officiating. Committal prayers and interment will follow in the Citizens Cemetery, Fort Gibson, OK with Rob Waltman, Cade Waltman, Jeremy Hayes, Todd Bean, Mike Hammons and Bryan Harber serving as casket bearers. William Raper and Michael Eubanks will serve as honorary casket bearers. The family of Billy Boyd Arnett has entrusted his care, service and burial to Clifford D Garrett Family Funeral Home, Fort Gibson. 918-478-2555. Online condolences may be left at clifforddgarrettfamilyfh.com

Billy Boyd Arnett was born November 28, 1974, to Billy Glen Arnett and Linda Jean Arnett in Muskogee, Oklahoma. He left this earth unexpectedly on May 11, 2022. He attended Fort Gibson Schools all of his school years, graduating in 1993.... View Obituary & Service Information

The family of Billy Boyd Arnett created this Life Tributes page to make it easy to share your memories.

Send flowers to the Arnett family.