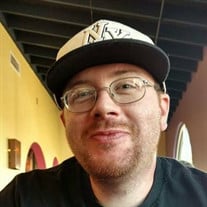 Cameron Chase Davis, 29, of Morgan’s Point Resort, Texas was born April 7, 1987 in Spokane, Washington to Jeff and Stacey (Butts) Davis and passed away Sunday, March 19, 2017 at his home. Cameron Davis was known to many and loved by all. Cameron was one of the most honest and genuine people you could ever meet. He spoke the truth, even if sometimes he shouldn't. His personality and honesty was always a welcome change to the politically correct world we live in now. Cameron was one of a kind, and as such many reached out to him. He never turned anyone away, and always saw the good in people. His passing is a loss to the world, and to his family, extended family and friends a like. For all the things I'll never get to say to you again. Cameron, Happy Birthday, Happy Halloween, Happy Thanksgiving, Merry Christmas, Happy new Years, and lastly, I love you. Until the time is right, and we all get to drink together again, watch over us Viking Warrior! Funeral services for Cameron will be 2:00 PM Monday, March 27, 2017 in the South Bethel Cemetery Chapel, Braggs OK with Elder David Davis officiating. Committal prayers and interment will follow in the South Bethel Cemetery with Stacey Davis, Sean Davis, Ryan Davis, James Davis, Drake Butts and Dewayne Butts serving as casket bearers. In lieu of flowers the family request donations be made in Cameron’s name to a charity of your choice. The family of Cameron Chase Davis has entrusted his services and burial to Clifford D Garrett Family Funeral Home and Cremation Service 1224 E Poplar/PO Box 1973 Fort Gibson, OK 918-478-2555. Online condolences may be left at clifforddgarrettfamilyfh.com

Cameron Chase Davis, 29, of Morgan&#8217;s Point Resort, Texas was born April 7, 1987 in Spokane, Washington to Jeff and Stacey (Butts) Davis and passed away Sunday, March 19, 2017 at his home. Cameron Davis was known to many and loved by all.... View Obituary & Service Information

The family of Cameron Chase Davis created this Life Tributes page to make it easy to share your memories.

Send flowers to the Davis family.