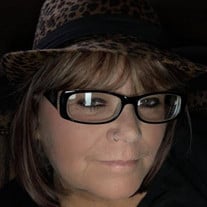 Carla Lee (Ashlock) Shores, 56, was born in Tulsa, OK on December 24, 1962 to Robert and Mary (James) Ashlock and peacefully passed away March 4, 2019 at her home in Braggs. She attended school in Tulsa and graduated from Braggs High School in 1981. She was a devoted wife to Bill Shores, blessing their family with two sons, Bruce Kyle and Christopher Shores. She worshipped our Lord at Braggs Emmanuel Pentecostal Holiness Church, lifting others in faith with her dedication to God. She often was called first for prayer, as the ultimate prayer warrior. Her career was well spent touching lives with Goodwill Industries, and was a homemaker. She never met anyone who left as a stranger and will be missed by many. Carla enjoyed visiting the beaches in Florida, basking in the sun and admiring the ocean’s depth. Carla was the life of the party, bringing smiles to everyone’s faces. There wasn’t a moment that passed where she didn’t bring joy to those around her, sharing her own light within. She was preceded in death by her son, Christopher Robert Shores; and her father, Robert Leo Ashlock. She is survived by her husband, Bill Shores of the home; her son, Bruce Kyle Shores of Braggs, OK; her mother, Mary Ashlock of Gore, OK; her sisters, Susan Cates and husband Ross of Norman, OK and Renella Capps and husband Johnny of Gore, OK; her brother-in-law, Bob Shores and wife Jennifer of Broken Arrow; her nieces, Taralee Montgomery and husband Colton of Gore, OK, Katelyn Capps of Gore, OK, Savanna Isbell of Broken Arrow, OK; and Halei Mock of Nashua, NH; great nieces, Aubrei Pennington, Annabella Blauvelt and Reece Montgomery; as well as her grandson at heart Kye Isbell and many other children that she loved as her own, most especially the Kizzia clan. She will also be missed by Bentley, her canine companion, several extended family and many friends. Visitation will be Thursday, March 7, 2019 at Clifford D Garrett Family Funeral Home in Fort Gibson with family receiving friends 5PM-7PM. A service celebrating Carla’s life will be held at 11AM Friday, March 8, 2019 at Emmanuel Pentecostal Holiness Church in Braggs, OK with Brother Tommy Tomlinson and Jack Carner officiating. Bruce Kyle Shores, Johnny F. Capps, Anthony Bonilla, Larry Ashlock, David Ashlock and Johnny Ashlock will serve as casket bearers. The family of Carla Lee Shores has entrusted her care, services and cremation to Clifford D Garrett Family Funeral Home, Fort Gibson. 918-478-2555. Online condolences may be left at clifforddgarrettfamilyfh.com

Carla Lee (Ashlock) Shores, 56, was born in Tulsa, OK on December 24, 1962 to Robert and Mary (James) Ashlock and peacefully passed away March 4, 2019 at her home in Braggs. She attended school in Tulsa and graduated from Braggs High School... View Obituary & Service Information

The family of Carla Lee (Ashlock) Shores created this Life Tributes page to make it easy to share your memories.

Send flowers to the Shores family.