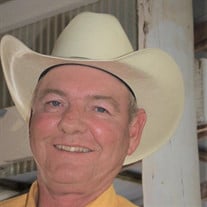 Cecil Edward Swepston, 63, of Fort Gibson was born in Tahlequah, OK on March 15, 1956 to Owen Walter and Anna Bell (Qualls) Swepston and departed this life early Sunday morning April 14, 2019 at his home with his loving family by his bedside. Cecil had 11 siblings and was raised in the Keys area where he graduated 8th grade. Cecil became a self-sufficient adult at an early age. During his sophomore year in high school, he began working at a pest control company and worked a second job to support himself. After a short time, he went to work at Love Bottling. On May 2, 1974 he married the love of his life, Sharon Guinn and of that union came two daughters. During the early years of their marriage Cecil worked on a ranch in the Peggs area and then at the Oklahoma State Highway department. In 1978 he settled in his career at Fort Howard which later became Georgia Pacific as a welder/millwright and retired from there in the early 2000’s. Cecil worked hard to make life easy for his family, spending many late nights cutting wood to sell after putting in a long day at the paper mill. Cecil loved to coon hunt and spent many years fighting chickens, which he was very successful at. When he became interested in cattle and horses, he used every opportunity to learn by surrounding himself with people with the right knowledge. He rode bulls at a young age and began team roping as he got older, winning several saddles and instilling a love for horses in both of his daughters. After raising cattle and horses for years, Cecil and Sharon decided to turn back to her showing roots, and quickly became competitive at a National level with boer goats, having the National Premier Sire several years running. His core values of integrity, honesty, hard work and dedication made Broken S Ranch one of the most successful and respected show quality boer goat production operations in the Nation. After years of Sharon planting the seeds, in 1990 Cecil gave his life to the Lord and began his ministry. After visiting several different churches, he found his place in Sharon’s home church- the Tahlequah Church of God 7th Day. He served in many different capacities before being called to Pastor. He not only served as Pastor to the Tahlequah church, but would also travel to other churches. Serving the Lord was his passion and he shared that with others at every opportunity. As the grandkids grew and became interested in 4-H and FFA, Cecil turned his focus to supporting not only them, but many other kids in the schools surrounding them, hoping to give each child the best opportunity they could to learn the valuable life lessons the FFA and the livestock industry provides. Year after year Cecil supported the Fort Gibson local show, the Muskogee Regional livestock show, sponsored kids at convention and other events, and would instigate a bidding war in a heartbeat to raise money at the annual pie auction. He will be missed by all that knew him. Cecil is preceded in death by his parents; sisters, Eva Nell Slover, Sue Trammel and Georgia Ann Price; brothers, Bobby York, Jimmy York and Bill Price; his in-laws, Fred and Ruby Guinn. Those left to cherish his memory are his wife Sharon of the home; daughters, Sherry Greathouse and husband James of Fort Gibson; and Shannon Vahdatipour and husband Chuck of Fort Gibson; grandchildren, Chase Gifford and fiancé Leah Steelmon, Shelby Gifford, Megan Greathouse, Emma Gifford, Abby Vahdatipour and Raygan Greathouse; sister, Debbie Gardesser and husband Ronnie of West Siloam Springs; brothers, Charles York and wife Janice of Tahlequah, Wade Swepston of Texoma and Ray Swepston of Texas; sister in law, Kathy Scott of Fort Gibson, many nieces, nephews, great nieces and nephews and many friends. A visitation will be held Wednesday, April 17, 2019 at Clifford D Garrett Family Funeral Home in Fort Gibson with the family receiving friends 5PM-7PM. A service celebrating Cecil’s life will be 2PM Thursday, April 18, 2019 at the Crescent Valley Baptist Church in Tahlequah with Reverend Chip Hinds, Reverend Glen Rowan and Reverend Bud Ullrich officiating. Committal prayers and interment will follow in the Hendricks Cemetery in Tahlequah with James Greathouse, Chuck Vahdatipour, Chase Gifford, Raygan Greathouse, Justin Scott and Kolby Martin serving as casket bearers. Honorary casket bearers are Ronnie Gardesser, Randy Trammel, J.R. Patterson, JB Trimble, Bob Lindenfelser, Bill Stanton, Mark Berry, Micah York, David Taylor, Mitchell York, David Stanley, Gary Gillam, Ron Dilley, Clue Anderson, Mark Seabolt, Hank Johnston, Clay Myers, Anthony Maher, Jerry Harris, David Woodward, Walter Maher, Bryan Craig, Albert Guinn, Nathan Martin, Randy Witt, Bobby Trammel, Brent Townsend, Jon Landers, Ron Leach, David “Booger” Deskin, Kevin Hart, Dustin Finch, Randall Rochell, Earl Peacock, Glen Ryals, Jimmy Fort, Keith Hardbarger and all the buddies that shared in his coon hunting, cock fighting, team roping and goat showing adventures. In lieu of flowers the family request donations in Cecil’s name to Edward Jones, attn: Broken S Ranch Youth Livestock Fund, PO Box 458, Fort Gibson, OK 74434. The family of Cecil Edward Swepston has entrusted his care, services and burial to Clifford D Garrett Family Funeral Home, Fort Gibson. 918-478-2555. Online condolences may be left at clifforddgarrettfamilyfh.com

Cecil Edward Swepston, 63, of Fort Gibson was born in Tahlequah, OK on March 15, 1956 to Owen Walter and Anna Bell (Qualls) Swepston and departed this life early Sunday morning April 14, 2019 at his home with his loving family by his bedside. Cecil... View Obituary & Service Information

The family of Cecil Edward Swepston created this Life Tributes page to make it easy to share your memories.

Cecil Edward Swepston, 63, of Fort Gibson was born in Tahlequah,...

Send flowers to the Swepston family.