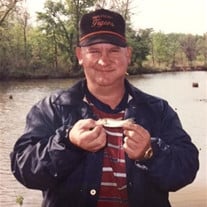 Charles Elmo Bolinger, 74 of Tahlequah, OK was born February 6, 1944 in Muskogee, OK to Denzley and Dona (Barrett) Bolinger and passed away peacefully Monday, July 23, 2018 in Muskogee, OK with his family by his side. He was raised in the Midland Valley area in Muskogee, OK but moved to the Tahlequah, OK area in 1977. Charles graduated from Muskogee High School and continued his education at Northeastern Junior College receiving an associate’s degree. On July 11, 1970 he married the love of his life, Rebecca Ann Scott, they spent 48 years and 12 days together, and to this marriage two children were born, Jeff and Geneva. Charles worked as a Leadman at Acme Engineering for 40 years and was the proud owner of Tahlequah Flea Market from 1989 to 2009. He loved the outdoors. Fishing was one of his favorite things to do along with mowing. Charles loved all types of music but especially enjoyed Bob Wills and the Texas Playboys. He was preceded in death by his parents; and sister, Judy Brassfield. Those left to cherish his memory are his wife, Rebecca of the home; son, Jeff Bolinger and wife Christy of Tahlequah; daughter, Geneva Ricano of Houston, Texas; two granddaughters, Lola Ricano and Claire Bolinger; two grandsons, Sammy Ricano and Wyatt Bolinger; sisters, Louise Rappe of Okay, OK and Saundra Osborn of West Siloam Springs, OK and brother, Roger Bolinger of Fort Gibson, OK, many nieces, nephews, cousins and many friends. No services are planned at this time. In lieu of flowers the family request donations in Charles’ name to Boys and Girls Club of Tahlequah 400 West Morgan St Tahlequah, OK 74464 or to the Alzheimer’s Association at www.alz.org. The family of Charles Elmo Bolinger has entrusted his cremation to Clifford D Garrett Family Funeral Home, Fort Gibson. 918-478-2555 Online condolences may be left at clifforddgarrettfamilyfh.com

Charles Elmo Bolinger, 74 of Tahlequah, OK was born February 6, 1944 in Muskogee, OK to Denzley and Dona (Barrett) Bolinger and passed away peacefully Monday, July 23, 2018 in Muskogee, OK with his family by his side. He was raised in the Midland... View Obituary & Service Information

The family of Charles Elmo Bolinger created this Life Tributes page to make it easy to share your memories.

Send flowers to the Bolinger family.