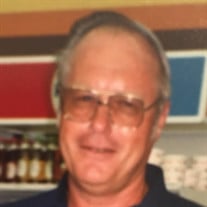 Clarence Clifford Short, 78, a lifelong Muskogee resident, was born October 30, 1937 in Muskogee, OK to Marvin Clifford and Lillian (Blundell) Short and peacefully passed away Friday, June 3, 2016 in Muskogee. Clarence grew up in Muskogee where he attended school and graduated with the Class of 1956. His career started in construction, serving his carpenter apprenticeship from 1957-1961. He went to work for local construction companies building schools, banks, post offices and the barracks at Camp Gruber in Braggs. He traveled extensively, working on the East coast during the eighties. Clarence spent most of his career with Ricketts Construction and Atlas Organization TAO and retired in 2005 as Superintendent. “The boss is the first one on the job and the last one to leave,” a motto he lived by. Considered the handy man, he was always willing to help build or fix anything the kids would need help with. No problem to big or small, always willing to help. He was great with his hands, and could build anything. Clarence loved his pink and white 55’ Ford, and listening to classic country and gospel music. In his younger years he was a big fan of professional wrestling. He loved all his animals and the Holidays when all the kids would come home. In his later years he and Signora would travel the country antiquing. Clarence is preceded in death by his parents, sister, Anna Short Rowell; brother, Marvin F Short; baby daughter, Judy Lynn Short; daughter in law, Sharon K Robbins Short and son-n-law, Jerry Fairchild. Those left to cherish his memory are his wife, Signora of the home; daughters, Susan Short Rodgers (Ronnie) of Muskogee, Kay Short Bobo (Reggie) of Muskogee, Danielle Fairchild (Tommy Sam) of Muskogee; sons, Roy Clifford Short (Shelley) of Fort Gibson, Roger Dale Short of Fort Gibson, John Edward Meadows of Muskogee; 13 grandchildren, 26 great-grandchildren, brother, John Short (Charlotte) of Muskogee; many nieces, nephews and cousins, his cat, Katy Cat and three dogs, Molly, Morgan and Jake, along with many friends. In lieu of flowers the family request donations in Clarence’s name to Muskogee Paws at pawsforadoption.com, or Checotah Animal Shelter Happy Paws 2222 N 4210 Rd Checotah, OK 74426 A memorial service celebrating the life of Clarence will be held 2PM Thursday, June 9, 2016, in the Clifford D Garrett Family Funeral Home Chapel with Pastor Danny Gandara officiating. The family of Clarence Clifford Short has entrusted his cremation and services to Clifford D Garrett Family Funeral Home and Cremation Service 1224 E Poplar/PO Box 1973 Fort Gibson, OK 918-478-2555. Online condolences may be left at clifforddgarrettfamilyfh.com

The family of Clarence Clifford Short created this Life Tributes page to make it easy to share your memories.

Send flowers to the Short family.