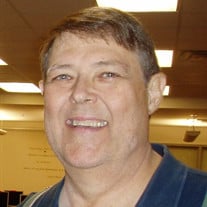 Clifford Michael Haug, 1954-2014 Mike, as everyone called him, was born to Ruth and Oren Haug on February 4, 1954 in Oklahoma City, OK. He grew up in Midwest City, OK with sister, Linda Haug Ward of Owasso, OK; and brother, Joseph Hagan of Stuart, FL. He married his wife, Betty Tharp Haug, September 22, 1977. Mike loved all sports and excelled in any he tried. Basketball and baseball were high school favorites. He played at Carl Albert High School in Midwest City. His big love was flying. He was accepted into the United States Air Force Academy and graduated in 1976. Once he graduated, Mike cross-commissioned into the US Navy to fly jets. He loved naval aviation and flying the A-7 Corsair attack plane. He wore his “wings of gold” with obvious pride. He was stationed aboard the USS Midway in Japan, the USS America, and the USS Forrestal. His naval career took him around the world. His ready smile and friendly curiosity about new cultures made him many friends around the globe. After his naval career, Mike decided to make a major career shift. He became a secondary teacher. He also became quite proficient with computers. He became the business department chairperson and also the school technology coordinator for Centennial High School in Frisco, Texas. He loved both jobs; especially working with the students. After many years of teaching, Mike and his wife Betty retired and moved to Owasso, OK. Mike loved life and lived it to the fullest. His sharp wit, love of storytelling, jokes, and keen mind will be missed by a multitude of family and friends. He always said that he did not want anyone to mourn his death, but to celebrate his life! Please know that Mike is in heaven with the Lord, his mom, dad and a boatload of relatives and pets! In lieu of flowers, the family is asking that you make a donation to your local animal shelter in Mike’s honor. Memorial services will be held 11:00 AM, Monday, April 28, 2014 at Fort Gibson National Cemetery. The family of Clifford Michael Haug have entrusted his cremation and services to Clifford D Garrett Family Funeral Home, 1224 E Poplar Fort Gibson, OK 74434. 918-478-2555. Online condolences may be made at clifforddgarrettfamilyfh.com

Clifford Michael Haug, 1954-2014 Mike, as everyone called him, was born to Ruth and Oren Haug on February 4, 1954 in Oklahoma City, OK. He grew up in Midwest City, OK with sister, Linda Haug Ward of Owasso, OK; and brother, Joseph Hagan of Stuart,... View Obituary & Service Information

The family of Clifford Michael Haug created this Life Tributes page to make it easy to share your memories.

Send flowers to the Haug family.