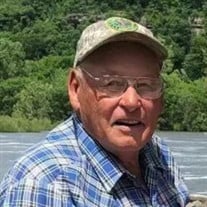 Daniel LeRoy Plotts, 86, of Midvale, Utah entered Heaven’s gates on Tuesday, August 24th, 2021, in Fort Gibson, OK. He was born May 23, 1935, in Decatur, Kansas to Wayne and Milda (Krohlow) Plotts. He attended Oberlin Community High School and continued his education and received a Bachelor’s degree in forensic science. Dan enlisted in the United States Army on March 31, 1955 and received an honorable discharge on February 28, 1961. After his Army career he started a towing company and environmental drilling company. He raced cars for four years, loved fishing, traveling to visit family, and was known for his great story telling. One of Dan’s proudest moments was in 1958, when he won the Ironman contest in Hawaii. He was a proud member of the NRA, American Legion and the National Drilling Association. He was friend to everyone and will be missed by many. His memory will be kept alive by his sons, Roy Plotts (Nadia), Greg Plotts (Lori) and daughter, Melody Edoff (John). He is also survived by 12 grandchildren and 11 great grandchildren; extended family and many friends. Daniel was preceded in death by his parents; his brothers, Clyde, Bill and Lowell Plotts; and an uncle, Jim Plotts. Funeral services celebrating Dan’s life will be held 11:00AM Wednesday, September 1, 2021 at Clifford D. Garrett Family Funeral Home Chapel 1224 E Poplar Street, Fort Gibson, OK 74434. Committal prayers and interment will follow at 12:00PM at Fort Gibson National Cemetery in Fort Gibson, OK with full military honors. The family of Daniel LeRoy Plotts has entrusted his care, services and burial to Clifford D Garrett Family Funeral Home, Fort Gibson. 918-478-2555. To express condolences to the family, please visit www.clifforddgarrettfamilyfh.com.

The family of Daniel LeRoy Plotts created this Life Tributes page to make it easy to share your memories.

Send flowers to the Plotts family.