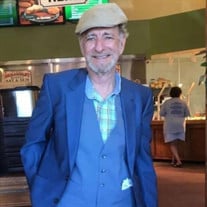 David Joe Ainsworth, 70, of Oklahoma City, OK was born July 7, 1950 in Oklahoma City to Billy Joe and Myrtle Evelyn (Henson) Ainsworth and peacefully passed away Wednesday, May 19, 2021 at home with his loving family by his side. David grew up and attended school in the OKC area and continued his education, receiving an Associate’s Degree in Psychology. He enlisted in the United States Army in Oklahoma City where he served two tours in Vietnam. David received many medals and commendations, National Defense Service Medal, Vietnam Service Medal, Republic of Vietnam Campaign Medal, Good Conduct Medal (three awards) Army Commendation Medal, Rifle M-16 Expert Qualifications Badge, Leadership and Management Development. He served as a Chaplain Assistant and Audio-TV Specialist. He was honorably discharged and retired from the Army as a E-6, Sergeant. His love for tv and radio took him many places. He was a reporter for KOKH, and interviewed many famous celebrities. One being Crystal Gayle who was known for her long beautiful hair. His daughter Davina was present for the interview and accidentally spilled her cake in Crystal’s hair, where Crystal laughed and proceeded to explain how it took two-three hours to wash her hair in the morning. When David was 14, he had the distinct honor of announcing on radio that President Kennedy’s life had been taken in Dallas. He always considered this a huge moment in his career, which started early. His radio voice as Big Joe Dandy was deep and smooth with perfect pitch to keep you interested in every word he said. David had a huge radio presence and was a celebrity himself, even though he didn’t think so. After retiring from radio, he became an Elvis impersonator for charity events. Loved singing karaoke, he spent many hours in his music room singing karaoke and using his dj voice in between songs. When he wasn’t playing music he was searching scripture. He was also an ordained minister. He had the joy of officiating his oldest son David Ainsworth Jr.’s wedding and then daughter Davinia’s wedding. He married Angelica Vogel on July 7, 2019 in Hobart, OK and made their home in Oklahoma City. He will be missed by all that knew him. David is preceded in death by his parents, granddaughter, Destiny Shelila Ann Ainsworth and sister, Trisha Ainsworth. Those left to cherish his memory are his wife, Angelica of the home; sons, Robert Kuehn of Yukon, OK; David Ainsworth, Jr. and Paul Ainsworth both of Oklahoma City, OK; daughter, Davina Breeden and husband Terry of Oklahoma City, OK; brothers, Bobby Ainsworth of Colorado, Dennis Ainsworth of Texas, Freddie Ainsworth of Tennessee, and Jimmy Ainsworth of Wyoming; 18 grandchildren, and 6 great grandchildren lots of extended family and many friends. A celebration of David's life will be held 1PM Wednesday, May 26, 2021 at the Clifford D Garrett Family Funeral Home Chapel in Fort Gibson. Committal prayers and interment will follow at the Fort Gibson National Cemetery in Fort Gibson, OK with full military honors. The family of David Joe Ainsworth has entrusted his care, cremation and service to Clifford D Garrett Family Funeral Home, Fort Gibson. 918-478-2555. Online condolences may be left for the family at clifforddgarrettfamilyfh.com

David Joe Ainsworth, 70, of Oklahoma City, OK was born July 7, 1950 in Oklahoma City to Billy Joe and Myrtle Evelyn (Henson) Ainsworth and peacefully passed away Wednesday, May 19, 2021 at home with his loving family by his side. David grew... View Obituary & Service Information

The family of David Joe Ainsworth created this Life Tributes page to make it easy to share your memories.

Send flowers to the Ainsworth family.