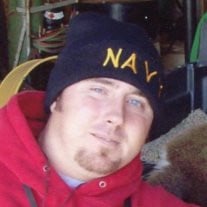 David Anthony Blair Burress of Muskogee, OK passed away Sunday, June 16, 2013, at the age of 34. He was born in Muskogee on Monday, July 10, 1978. David is the son of Sheryl and Jerry Hood of Tahlequah and Tony and Marlene Burress of Keefeton. He grew up in Fort Gibson where he attended school, then transferred to Oktaha, where he graduated in 1996. He then enlisted in the Navy, where he proudly served our country, and traveled to many different places. After completing his military duties, he attended Connors State College, where he was always on the President’s Honor Roll, and earned an Associate Degree in Biological Science. David has always been a sports fan, first playing for Raiders Soccer Team and winning multiple State Championships. He also enjoyed high school baseball with Coach Burt. David was an avid hunter and fisherman, but his favorite was deer hunting. He really loved the Greenbox on his cousin James’ ranch in Texas. He loved hunting at Nannie and Papa’s off the porch and at Mom and Jerry’s. To say he was an avid Sooner fan is an understatement. David was born a Sooner fan, following in his Grandpa Blair’s footsteps. Crimson ran thru his blood. Nothing could be planned on Sooner ballgame days! In 2007, David was involved in a diving accident that left him a quadriplegic. David tried to remain positive thru his recovery, going thru many ups and downs. He began attending New Hope Assembly of God and was very involved in the “Celebrate Recovery Program”, having just celebrated his 5th year. David felt that God’s will for him was to keep on keeping on. He was willing to try and help anyone in need, and never met a stranger. David was preceded in death by Grandma and Grandpa Hood, Grandma and Grandpa Blair, Uncle Donald Ross Burress, Great Grandma Syble Collins, Great Grandma Zora Stephenson, and Aunt Odene Rasco. David is survived by his Mom, Sheryl and Step-Dad Jerry Hood, his Dad, Tony and Step-Mom Marlene Burress, siblings; Chet and Katie Hood, Angie Hood Cobb, Cara Hood, Tisha Burress, Tyeler Burress, and Amanda Hood. Uncles and Aunts; Billy and Sandra Blair, Rod and Trena Burress, Phillip and Leah Blair, Pat and Ralph Miller, Barbara Hood, Mike Hood, Hugh and Cherie Eubanks, and many special nieces and nephews and a host of dear friends. A visitation will be held Thursday, June 20, 2013 with the family receiving friends from 6:00PM to 8:00PM, at the Clifford D Garrett Family Funeral Home in Fort Gibson. A funeral service celebrating the life of David will be held at 11:00AM, Friday, June 21, 2013, at the Clifford D Garrett Family Funeral Home Chapel in Fort Gibson with Mr. Billy Blair officiating. Interment will follow at Citizens Cemetery with Jared Webster, Jason Lee, Josh Tackett, Tyeler Burress, Ryan Burress, Roy McElmurry, Randy Burress and Mike Grace serving as casketbearers. Honorary casketbearers will be Jason Blair, Brad Henderson, Jeff Henderson, DJ Maxey, Justin Backes, Casey Pousson, Dan Pritchett and Kyle Touchette. To honor David’s love of OU football the family has requested casual dress with an OU theme. Services are under the direction Clifford D Garrett Family Funeral Home and Cremation Service 1224 E Poplar Fort Gibson, Oklahoma. (918)478-2555. Online condolences may be made at www.clifforddgarrettfamilyfh.com

David Anthony Blair Burress of Muskogee, OK passed away Sunday, June 16, 2013, at the age of 34. He was born in Muskogee on Monday, July 10, 1978. David is the son of Sheryl and Jerry Hood of Tahlequah and Tony and Marlene Burress of Keefeton.... View Obituary & Service Information

The family of David Anthony Blair Burress created this Life Tributes page to make it easy to share your memories.

Send flowers to the Burress family.