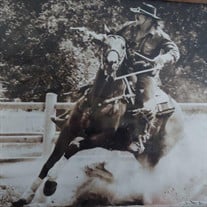 David Paul Cogdill, 75, of Braggs, OK was born February 28, 1946 in Chicago, IL to Carl Edwin and Marilyn Elizabeth (Johnston) Cogdill and peacefully passed away Friday, June 25, 2021 in Gore, OK. He passed as he lived, on his own terms. After graduating high school in 1964, Dave joined the United States Marine Corps and proudly served his Country during the Vietnam War. He received an Honorable Discharge in July of 1970 as a Corporal. After his Military career, Dave married his first wife Joanne Lewandowski and had three boys: Shawn, Ryan and Dustin. And began his lifelong career of working in the construction industry as a bricklayer and carpenter. Over the years, Dave called many places home; Illinois, Wisconsin, Arizona, and California and in 2004 he settled in Braggs, OK until his passing. Dave loved his horses and being a cowboy! He was a member of the Cowboy Mounted Shooters Association and enjoyed doing cowboy mounted shooting competitions. He definitely was a character and someone you won’t forget-a one of a kind. As quickly as he would bark orders at you, he would just as quickly give you the shirt off his back if he knew you needed it. He will truly be missed by all that knew and loved him. David was preceded in death by his parents. Those left to cherish his memory are his sons, Shawn (Edie) Cogdill of Braggs, OK; Ryan (Jenny) Cogdill of Hartford, WI; and Dustin (Heidi) Cogdill of Rockaway Beach, OR; grandsons, Corey (Alexx) O’Connell of Flagstaff, AZ and Ethan Cogdill of Rockaway Beach, OR; granddaughters, Megan (Jake) Cogdill of Whitewater, WI; Kira Cogdill of Braggs, OK; Breanna Becker of Sayner, WI; Alyssa (Joe) Pawelski of Greenfield, WI; Christina Cogdill of Burlington, WI; and Alyssandra Cogdill of Rockaway Beach, OR; great grandchildren, Autumn and Grace O’Connell, Maci Cogdill, Logan Pitej, Oden Pawelski and Austyn Carey; brothers, Bill (Linda) Cogdill of Peoria, AZ; Jim Cogdill of Elk Grove Village, IL; and Chris Cogdill (Katie) of Huron, OH; sisters, Pat (Bill) Holt of Lake Orion, MI; Sue (Don) Sharko of Orlando Park, IL; Mary (David) Tyree of Kenosha, WI; and Virginia (Jeff) Banicki of Paddock Lake, WI; many extended family and a host of friends. “There are no words to express the amount of gratitude to all the nurses and aides at Compassus Hospice and Palliative Care, and Gore Nursing Center.” A graveside service celebrating David’s life will be held Thursday, July 8th at 10:00am at South Bethel Cemetery in Braggs, OK with Brother Justin Kinman officiating. Funeral dinner to follow at the American Legion, Braggs, OK. The family of David Paul Cogdill has entrusted his care, service and burial to Clifford D Garrett Family Funeral Home in Fort Gibson, OK. 918-478-2555. Online condolences may be left for the family at clifforddgarrettfamilyfh.com/obituaries/David-Cogdill-2

David Paul Cogdill, 75, of Braggs, OK was born February 28, 1946 in Chicago, IL to Carl Edwin and Marilyn Elizabeth (Johnston) Cogdill and peacefully passed away Friday, June 25, 2021 in Gore, OK. He passed as he lived, on his own terms. After... View Obituary & Service Information

The family of David Paul Cogdill created this Life Tributes page to make it easy to share your memories.

Send flowers to the Cogdill family.