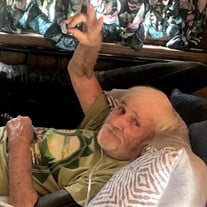 David H. Thomas, Sr., 75, of Muskogee, OK was born October 7, 1944 in Muskogee, OK to R.V. and Beulah Lynette (Bates) Thomas, Sr. and peacefully passed away Wednesday, April 8, 2020 at his home in Muskogee. David proudly served with the United States Navy during Vietnam. He had a love for fishing, he was always ready and willing to wet a hook to see what the catch would be for the day. He loved to go out and ride dune buggies with his friends, they always had good stories to tell and had fun making memories. Stories from his friends were told that he was and good man and a good friend, always willing to help out when needed. Being his daughter, I didn’t get to spend a lot of time with him throughout my life, but he was here to help take the pain away from losing my mother and my older brother just months apart, even though he was as sick as he was. So, I would say he was here for me when I so desperately needed him the most. As for my little brother, David Thomas, Jr., his favorite part of our dad was him being back in their lives and watching my sister Lisa and our dad develop such a great bond and they made such a good team. He was a special man and was loved dearly and will be greatly missed by all. His daughter Lisa, misses him already. David was preceded in death by his parents and Sharon Thomas. He is lovingly survived by his daughter; Lisa Thomas of Muskogee; son, David H. Thomas, Jr. of Muskogee; brother’s, R.V. Thomas, Jr. and John Paul Thomas both of Muskogee; granddaughters, Channing Miller of Muskogee, Troy Miller of Louisiana; grandsons, Garrett Livingston of Muskogee and Cole Lehman of Arkansas; great grandson, Tripp Miller of Muskogee; great granddaughters, Aubrie Ray of Arkansas and Willow Miller of Louisiana; honorary brothers, Don Havens, Dean Thompson, Benny Wheeler all of Muskogee and Randall (Frosty) Richardson of Spiro, OK. A memorial service will be held at a later date after the Covid-19 quarantined has been lifted. The family of David H. Thomas, Sr. has entrusted his cremation to Clifford D Garrett Family Funeral Home, Fort Gibson, OK. 918-478-2555 Online condolences may be left at clifforddgarrettfamilyfh.com

The family of David Hugh Thomas Sr. created this Life Tributes page to make it easy to share your memories.