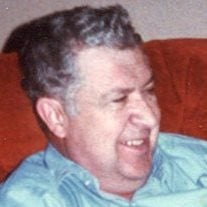 Dennis Harmon Vanscoy, 77, of Wagoner, OK was born June 10, 1936 in Lowell, AR to Alvin Glen and Mary Letitia (Downum) Vanscoy, and passed away peacefully with his family by his side, Tuesday, April 8, 2014 in Tulsa. Dennis graduated from Springdale High School with the class of 1954. He then attended the Local #176 Plumbing School and went on to own a successful plumbing and heating business. He fell in love with Wanda Notley and they married on December 24, 1965 at Barnsdall, OK, a marriage that lasted over 48 years. He taught Sunday school at Porter First Baptist Church and served as a member of the Porter School Board. Throughout his life Dennis had a love of the outdoors, often being found in his garden or hunting and fishing, depending on the time of year. He enjoyed playing cards and dominos with friends and family. During his retirement years he especially enjoyed traveling the Country, finding new places to camp and fish. Dennis was preceded in death by his parents, a brother; Alvin Vanscoy, and sisters; Nadene Townzen and Georgia Mae Rock. Dennis is survived by his wife, Wanda, of the home, sister; Anna Marie Walden of Vinita, OK, brother; Ray Vanscoy and wife Doris of Tulsa, OK, sister; Janice Breshears and husband Don of Centerton, AR, three sons; Doug Vanscoy and wife Lori of Bixby, OK, Jeff Vanscoy of Greenwood, AR, and Matt Vanscoy of Broken Arrow, OK, daughter; Michelle Loehr and husband Dale of Garden Plain, KS, thirteen grandchildren, eight great-grandchildren and one on the way, numerous nieces, nephews and a host of friends. A celebration of Dennis H Vanscoy’s life was held Saturday, April 12, 2014, at 1PM in the Porter First Baptist Church and was officiated by Brother Dennis Piearcy. Interment was in Springdale, AR at the Spring Creek Cemetery. Casket bearers were Lavoy Young, Dale Elliott, Ed Dugan, Otis Surrat and Bobby York. The family of Dennis Harmon Vanscoy entrusted his care, services and burial to Clifford D Garrett Family Funeral Home, 1224 E Poplar Fort Gibson, OK 74434. 918-478-2555. Online condolences may be made at clifforddgarrettfamilyfh.com

Dennis Harmon Vanscoy, 77, of Wagoner, OK was born June 10, 1936 in Lowell, AR to Alvin Glen and Mary Letitia (Downum) Vanscoy, and passed away peacefully with his family by his side, Tuesday, April 8, 2014 in Tulsa. Dennis graduated from... View Obituary & Service Information

The family of Dennis H Vanscoy created this Life Tributes page to make it easy to share your memories.

Send flowers to the Vanscoy family.