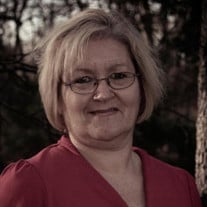 Diana Lynn (Rolland) Sparks was born on November 18, 1955 in Muskogee, Oklahoma to Donald and Norma (Cunningham) Rolland. Diana departed this earth on Friday, October 16, 2020 in Muskogee, Oklahoma at the age of 64. Diana grew up in Fort Gibson, Oklahoma and as the oldest of eight children, she spent her youth helping her parents care for her younger brothers and sisters, chasing cats into hayfields with a lit match, and coercing her little siblings into many other shenanigans. Diana attended Fort Gibson High School and graduated in 1975. She married Jimmy Sparks on December 6, 1975, and made their home in Fort Gibson, where they filled their home with love, laughter and three children, one daughter and two sons. She earned her Associates Degree from Bacone College in Muskogee. Diana worked for Oklahoma School Supply for several years in the 1980’s, and later as a clerk for W.W. Hastings Indian Hospital for 15 years, retiring in 2017. Diana was a member of the First Baptist Church in Fort Gibson, where she was a Sunday School teacher. She also spent many years volunteering her time to cook at the Kiamichi Church Camp. Diana and Jimmy spent many weeks road tripping across the country to visit various State and National Parks. She enjoyed camping, cooking, and rodeos, but her favorite pastime was spending time with her grandkids and family. She enjoyed spoiling each and every one of her grandchildren and attended every FFA event, soccer, softball, football, baseball, and basketball game, cross country and wrestling match that her grandkids were involved in. Diana held steadfast to her faith in the Lord and instilled in her family the love of Jesus Christ. Diana is survived by her husband, Jimmy, of the home, her daughter and two sons, Jaime Simmons and husband, Troy; Greg Sparks and wife, Peggy; and Jared Sparks and wife, Krissa, all of Fort Gibson, OK; grandchildren, Taylor Sparks, Isabella Nunez, Madelyn Cook, Madison Cook, Audrey Sparks, Andrew Sparks, Santana Nunez, Liliana Perez, Cash Sparks, and Ava Sparks; siblings, Pam Easton and husband David Holeman of Gore, OK, W. David Rolland of Fort Gibson, OK, Sammy Rolland and wife Malinda of Gore, OK, Tammy Williamson and husband Charles of Gore, OK, and Scott Rolland and friend Cindy Tackett of Muskogee, OK; numerous nieces, nephews, aunts, uncles, and cousins. Diana was preceded in death by her grandparents, Charley and Leona Rolland and James David “Shorty” and Jessie Cunningham; her parents; two brothers, Terry Rolland and James Rolland; one nephew, Christopher Rolland, and one great nephew, Zachary Fry. Visitation will be Tuesday, October 20, 2020 at Clifford D Garrett Family Funeral Home in Fort Gibson with the family receiving friends 5PM-7PM. A celebration of Diana’s life will be held Wednesday, October 21, 2020 at 1pm at the First Baptist Church in Fort Gibson, OK with Tony Shaw officiating. Pall bearers for Diana will be Andrew Sparks, Santana Nunez, Cash Sparks, W. David Rolland, Sammy Rolland, and Scott Rolland. The family of Diana Lynn Sparks has entrusted her care, services and burial to Clifford D Garrett Family Funeral Home, Fort Gibson. 918-478-2555. Online condolences may be left for the family at clifforddgarrettfamilyfh.com

The family of Diana Lynn (Rolland) Sparks created this Life Tributes page to make it easy to share your memories.

Send flowers to the Sparks family.