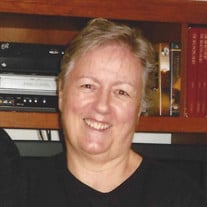 Diane Eldredge Payne, 78, of Fort Gibson, OK was born December 25, 1942 in Los Angeles, CA to Rollo and Ada (Klein) Pratt and peacefully passed away Tuesday, October 26, 2021 at her home with her loving family by her side. She graduated from Norwalk High School and continued her education attending Connors State College and Northeastern State University in Tahlequah, and received her Bachelor’s degree from Indiana University. On September 11, 1973, she married the love of her life and best friend, Jerry Payne in Las Vegas, NV; together they shared forty-eight years, one month and fifteen days making precious memories together. Diane worked at Conners State College as a Library Tech and retired on June 1, 1995. She had the most important job being a homemaker. She enjoyed reading and spending time with her family. Diane was a faithful member of The Church of Jesus Christ of Latter-Day Saints. She will be missed by all that knew her. Diane is preceded in death by her parents, a sister, Kathleen; brother, Walter; and a granddaughter, Lorianne Gillespie. Those left to cherish her memory are her husband, Jerry of the home; daughters, Lorraine Gillespie and husband Sam of Springdale, AR; Sherri Stephen of Sandy, UT; Desiree Hulsey and husband Bill of Florence, AZ; her son, Michael Payne and wife Melissa of Farmington, AR; 14 grandchildren, eight great grandchildren; brother, Lloyd Hatcher of Fallbrooke, CA; extended family and many friends. A Celebration of Diane’s life will be held at 12:30PM, Thursday, October 28, 2021 at Fort Gibson National Cemetery Pavilion with Bishop Chris Emler officiating. Sam Gillespie, David Hubler, Michael Payne, Jason Briley, Wilson Gonseth, David Parkes, Ryan Ferguson and Scott Munson will serve as casket bearers. Honorary casket bearers are Van Gillespie, James Payne, Jacob Corbaley, Billy, Luke and Joseph Hulsey. The family of Diane Eldredge Payne has entrusted her care, service and burial to Clifford D Garrett Family Funeral Home, Fort Gibson. 918-478-2555. Online condolences may by left for the family at clifforddgarrettfamilyfh.com

Diane Eldredge Payne, 78, of Fort Gibson, OK was born December 25, 1942 in Los Angeles, CA to Rollo and Ada (Klein) Pratt and peacefully passed away Tuesday, October 26, 2021 at her home with her loving family by her side. She graduated from... View Obituary & Service Information

The family of Diane E. Payne created this Life Tributes page to make it easy to share your memories.

Send flowers to the Payne family.