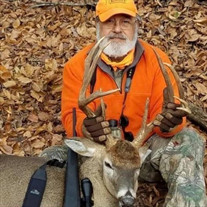 Donald Jaquez was born on October 22, 1940, the fifth son born to Eudoro and Francis Jaquez in Gallina, New Mexico. Don was raised in Northwestern New Mexico between Aztec and Durango, Colorado. He attended Aztec High School, was a varsity football player, but most importantly, fell in love with the Rocky Mountains and becoming an avid outdoorsman. After feeling the call of ministry on his life, he furthered his education at Southwestern Christian College in Oklahoma City, OK. He was a member of a gospel quartet there and made many memories traveling to different churches all over Oklahoma. While there, Don met the love of his life, Mary Tignor and they were married on June 1, 1964 at the First Pentecostal Holiness Church in Sulphur, Oklahoma by her father Rev. Leroy Tignor. They just celebrated 57 years of marriage. Don and Mary took their first church assignment in Coffeyville, KS in 1966. Their first-born son, Randall was born while living there. After a short time, he took over the Pastoral position at Marietta, Oklahoma where their second son Eric was born at the Ardmore, Oklahoma hospital. Don also pastored in Fox, Oklahoma. After leaving Fox, Oklahoma, the family moved to Davis, Oklahoma and Don took a position at Uniroyal Tire Company. The family’s next stop was the Ozark Conference of the International Pentecostal Holiness Church. Don pastored the Fairview Pentecostal Holiness Church for 5 years. While at the Ozark conference, he rebuilt the sanctuary of the church and also served as Conference Education director for 2 years. Don, Mary and the boys moved to New Mexico in the fall of 1979 where Don took a job building houses with his cousin, Bob Jaquez, who he loved like a brother. After eight months in New Mexico, the family moved to their forever home of Muskogee, Oklahoma in May 1980. Don was appointed as Pastor at the First Pentecostal Holiness Church on E & Fredonia. He was instrumental in relocating the church to Gibson and the Muskogee Turnpike (its current location) and changed the name to New Life Center. He led the team in building a brand-new facility from the ground up. He worked every day to make sure that this building we are in today has stood strong for nearly 40 years. Don remained the Pastor until his retirement in 2015. Don loved spending time in the great outdoors and the wonder of God’s creation. When Mary would ask why he loved to get up so early in the freezing weather and go to the woods, it was because he got to see God’s creation come to life with each sunrise and he felt closer to God there. His favorite day of the year was September 1st, when he and a few of his closest friends headed to Pagosa Springs, Colorado every year for their annual elk hunt. He always said “I’m going to God’s country!”. He had many successful hunts and harvested too many elk/deer and bear to count. Don loved his family greatly. He is survived by his wife Mary and son Eric of the home, Son Randall (Kim) Jaquez of Muskogee and his granddaughter Journey Jaquez of Muskogee. His two sisters, Stella Brown of Show Low, Arizona and Bernice Smith of Ardmore, Oklahoma. Also, his brother-in-law, Arlon Beadles of Georgia and too many cousins, nieces and nephews to name. He was preceded in death by his parents and his brothers (who died in order of their age). Earnest, Leo, Fidel and lastly Orlando. His sister-in-law Patricia Beadles and his mother and father-in-law Rev. Leroy and Johnnie Mae Tignor. A visitation will be held Monday, August 9, 2021 at Clifford D Garrett Family Funeral Home in Fort Gibson with family receiving friends, 5PM-7PM. A celebration of Don’s life will be held 10AM Tuesday, August 10, 2021 at New Life Center in Muskogee with Bishop Randall Drake and Reverend David Richardson officiating. A private family committal will be held with Ike Jacquez, Perry Randolph, Kyle Allred, Kevin Allred, Philip Duncan and Armon O’Brien serving as casket bearers. Honorary casket bearers are Gerald Rohleder, Monty Friend, Gene Gallagher, Arlon Beadles, Terry Smart and Ron Cagle. In lieu of flowers, memorial contributions may be made in Don’s name to the Rocky Mounty Elk Foundation http://www.rmef.org The family of Donald Jaquez has entrusted his care and services to Clifford D Garrett Family Funeral Home, Fort Gibson. 918-478-2555. Online condolences may be left for the family at clifforddgarrettfamilyfh.com

Donald Jaquez was born on October 22, 1940, the fifth son born to Eudoro and Francis Jaquez in Gallina, New Mexico. Don was raised in Northwestern New Mexico between Aztec and Durango, Colorado. He attended Aztec High School, was a varsity... View Obituary & Service Information

The family of Donald Jaquez created this Life Tributes page to make it easy to share your memories.

Send flowers to the Jaquez family.