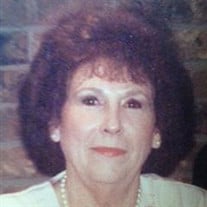 Dorothy Dean Huff, 85, was born in Solgohichia, Arkansas on August 7, 1929 to John Vinson Rhoden and Bonnie (Maxwell) Rhoden and joined her Heavenly Father on Thursday afternoon, May 21, 2015 at her home in Fort Gibson with her family by her side. Dorothy came from a very musical family. She sang while everyone else played their instruments. She loved to get together with her family and play and sing together. She graduated from high school in Morrilton, Arkansas. Dorothy originally moved to Muskogee at 18 with her daughter, to be near her sister, Pearl. She then met the father of her two sons. They moved to Heyworth, Illinois. There Dorothy took a job with State Farm Insurance. She stayed in Heyworth for about 20 years before moving back to Muskogee. Dorothy loved to dance and sing at the Senior Citizens Dance Hall in Tahlequah where she met, fell in love with and later married Jack Huff on March 19, 1994. Dorothy worked with the Department of Corrections where she was responsible for transporting inmates all over the state. Dorothy loved her job and everyone loved her. She retired at the age of 68. She and Jack loved to travel, sometimes driving seventy-five miles or more just to eat dinner. Dorothy was a loving wife, mother, grandmother, great-grandmother and great-great grandmother. She attended Freewill Baptist Church and loved going to estate sales. Dorothy was the baby of 12 children. She was preceded in death by her parents, 8 brothers and 3 sisters. She is survived by her husband Jack of the home. Her daughter Pat and husband Bill Stuckey of Jacksonville, Arkansas, son, Alan Batt of Austin, Texas, son Paul Batt of Heyworth, Illinois. Stepchildren; Allen Huff and wife Pam of Colombia, Tennessee, Terry Huff and wife Shirley of Stroud, Oklahoma, Scott Huff of Purcell, Oklahoma, Pam Fajardo and husband Jeff of Stillwater, Oklahoma, Jeff Huff and wife Karen of Wellston, Oklahoma. Numerous grandchildren, great grandchildren, and great-great grandchildren and many nieces and nephews, and a host of friends. Dorothy Huff was truly a special woman and will be missed greatly. In lieu of flowers, donations may be made in Dorothy’s name to Hometown Hospice 2307 S. York Muskogee, Ok 74403. A visitation will be held, Tuesday, May 26, 2015 with the family receiving friends from 5PM-7PM at the Clifford D Garrett Family Funeral Home in Fort Gibson. A funeral service celebrating the life of Dorothy will be held Wednesday, May 27, 2015 at 10:30 AM in the Clifford D Garrett Family Funeral Home Chapel with Minister Mark Young officiating. Committal prayers and interment will follow at the Fort Gibson National Cemetery. The family of Dorothy Dean Huff has entrusted her services and burial to Clifford D Garrett Family Funeral Home 1224 E. Poplar Fort Gibson, OK 918-478-2555. Online condolences may be left at clifforddgarrettfamilyfh.com

Dorothy Dean Huff, 85, was born in Solgohichia, Arkansas on August 7, 1929 to John Vinson Rhoden and Bonnie (Maxwell) Rhoden and joined her Heavenly Father on Thursday afternoon, May 21, 2015 at her home in Fort Gibson with her family by her... View Obituary & Service Information

The family of Dorothy "Dot" Dean Huff created this Life Tributes page to make it easy to share your memories.

Dorothy Dean Huff, 85, was born in Solgohichia, Arkansas on August...

Send flowers to the Huff family.