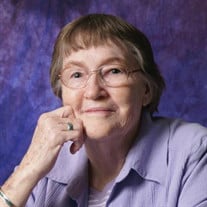 Dorothy (Dotty) June Dunlap Passed away on Friday, March 22 at 3:58 P.M. at the Fort Gibson Nursing home surrounded by family. She was 92 years old. Dotty was born July 4, 1926 in Muskogee, Oklahoma to Elmer Thompson and Mary Hawkins Thompson, but lived by the Arkansas River in the Fort Gibson Bottoms. She graduated from Muskogee Central High School and received her bachelor’s degree from Texas Christian University in 1948 before getting her Masters in Science Education at OSU, where she met her husband, Paul McNeel Dunlap, Jr. in a class at Camp Gruber. Paul and Dotty were married on November 17, 1950 on the stairwell at her parents’ home in Muskogee, and they shared 45 years together until Paul’s passing in 1995. Dotty had a full teaching career in both Landover Hills, MD, and Muskogee, Oklahoma, where she taught earth and life science courses at both AR and Muskogee High School. While in Landover Hills, Maryland, Dotty and Paul had four children: Susan, Neal, Frances and Keith. Dotty was an avid rock hound and nature lover, and she had the most fun when in or around a body of water or her home garden. She enjoyed reading historical accounts, and playing games, cards, and dominos with her friends and grandkids. She was famous for her sage dressing at Thanksgiving and her signature potato salad. Dotty adored being with her family, playing Uno, watching old movies, going to nature parks, going on road trips, dressing up for Halloween, digging in the dirt, and, as Paul would say, “wallowing in the water.” Dotty was also a member of the Retired Teachers Association and St. Paul’s and Fort Gibson United Methodist Churches. Dotty was preceded in death by her parents, Elmer and Mary (Hawkins) Thompson, her husband, Paul M. Dunlap, Jr. and her four siblings, Charles Thompson, Frances King, Margaret Ann McKee, and Robert Thompson. She is survived by her children, Susan and David Gourd of Tahlequah, Neal Dunlap of Iowa Park, Texas, Fran and Paul Heirich of Broken Arrow, and Keith and Sara Dunlap of Fort Gibson. Her beloved grandchildren include Jennifer and Christian Perry, Rob and Shannon Evans, Jami Dunlap, Kasie Lamb, Brian and Kimberly Heirich, Michael Heirich, Steven Heirich, David Dunlap, Jesse Dunlap, Noah Dunlap, Robbie and Jennifer Gourd, Jessica and Mickey Burke, Andrew and Kelsey Gourd, and Dillon Gourd. Her beloved great grandchildren include Jaylei, Grace, Emma, Emily, Grayson, Triston, Mickey Jr. and Rosemary. Dotty also leaves behind a multitude of dear nieces and nephews, and wonderful friends. She will be greatly missed, but fondly remembered. Viewing will be Thursday from 12:00P.M.-1:45P.M. at the Fort Gibson United Methodist Church. Dorothy June Dunlap’s service will be officiated by Reverend Dawn Richards in the sanctuary at the Fort Gibson United Methodist Church on Thursday, March 28 at 2:00 P.M. Interment will be at Memorial Park Cemetery, Muskogee, Oklahoma. Her pallbearers include Robbie Evans, Brian Heirich, Michael Heirich, Steven Heirich, Jesse Dunlap, Noah Dunlap, Andrew Gourd and Dillon Gourd. In lieu of flowers the family requests that you make a donation to the missions committee of either St. Paul’s or Fort Gibson United Methodist Churches. The family of Dorothy June Dunlap has entrusted her care, service and burial to Clifford D Garrett Family Funeral Home, Fort Gibson 918-478-2555 Online condolences for the Dunlap family may be left at clifforddgarrettfamilyfh.com

The family of Dorothy June Dunlap created this Life Tributes page to make it easy to share your memories.

Dorothy (Dotty) June Dunlap Passed away on Friday, March 22 at...

Send flowers to the Dunlap family.