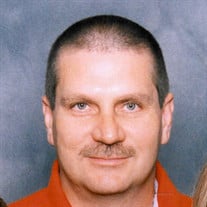 Dwayne Everett Whitlock, 60, of Muskogee, was born November 14, 1961, in Muskogee, to Charles and Minnie (West) Whitlock, and peacefully passed away Saturday, December 25, 2021, in Muskogee. He received his formal education in the Muskogee Public... View Obituary & Service Information

The family of Dwayne Everett Whitlock created this Life Tributes page to make it easy to share your memories.

Send flowers to the Whitlock family.