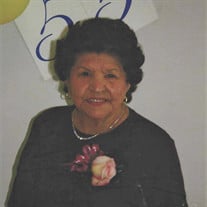 Estelle (Carter) Nutt, 101, of Fort Gibson, OK was born September 24, 1919 in Avant, OK to Jerry and Sally (Thompson) Carter and peacefully passed away Sunday, January 10, 2021 in Muskogee, OK. She married the love of her life, Cobie Nutt, on November 9, 1935 in Fort Gibson, OK. To this union, three children were born, Bobbie, Bill, and Carol. She was saved and baptized in her early adulthood. Estelle was employed with Griffins Foods for 56 years, retiring in 2005 at the age of 85 and also at the Elks Lodge as a waitress for 29 years. She loved her job and made many friends throughout her career. Estelle enjoyed playing her guitar and singing gospel music. She loved vacationing with family and friends, playing bingo, as well as watching her daughters and grandson bowl. Estelle is lovingly survived by her daughters, Bobbie Moffett of Petersburg, IL; and Carol (Hoopie) Pingleton of Fort Gibson, OK; daughter in law, Phyllis Nutt of Muskogee, OK; granddaughters, Terri Randle and husband Don of Petersburg, IL; and Vickie Harkreader and husband Robert of Wagoner, OK; grandsons, Doug Pingleton (Tisha) of Muskogee, OK; Brian Nutt and wife Leslie of Muskogee, OK; and Alan Nutt of Muskogee, OK; 18 great grandchildren; 15 great great grandchildren; and one great great great grandson soon to be born; many nieces, nephews, extended family and many friends. She was preceded in death by her parents; husband, Cobie; son, Bill Nutt; son in law, Earl Moffett; great granddaughter, Cassie Nutt; four sisters, four brothers, several sister and brother in laws. Estelle was a loving wife, mother, grandmother, aunt, and friend. She was loved by many and has blessed her family with great memories. Special thanks to Johnny, Sandra, Susan, and Mike for all of their loving care. A celebration of life will be scheduled at a later date. The family of Estelle Nutt has entrusted her cremation to Clifford D Garrett Family Funeral Home, Fort Gibson, OK. 918-478-2555. Online condolences may be left at clifforddgarrettfamilyfh.com

Estelle (Carter) Nutt, 101, of Fort Gibson, OK was born September 24, 1919 in Avant, OK to Jerry and Sally (Thompson) Carter and peacefully passed away Sunday, January 10, 2021 in Muskogee, OK. She married the love of her life, Cobie Nutt, on... View Obituary & Service Information

The family of Estelle (Carter) Nutt created this Life Tributes page to make it easy to share your memories.

Send flowers to the Nutt family.