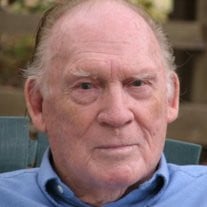 Fay Eugene Slape (known by his family as “Zoo”) was born March 24, 1928 in Fort Gibson, Oklahoma to Riley Slape and Ida Cawvey and joined his Heavenly Father Wednesday, November 13, 2013 in Weatherford, Texas at the age of 85. He grew up in Oklahoma, where he enlisted in the United States Army. After serving in the Army Gene enlisted in the United States Navy, proudly serving his country for over ten years before being honorably discharged in January 1957. Gene married the love of his life, Helen Mae Nichols on June 7, 1958, a marriage that lasted over 55 years. Gene and Helen made their home in Fort Worth, Texas where Gene worked for the City of Fort Worth as the Assistant General Foreman for the Street Department, retiring in 1984. After retirement they moved to Weatherford, Texas where Gene’s time was spent gardening and landscaping around his home. Gene enjoyed painting with oils and drawing with pencil, but his greatest joy came from playing with his grandchildren. He was a faithful member of Willow Park Church of Christ. Gene leaves behind to cherish his memory, his wife, Helen and five children; Amy Yvonne Shipman of Weatherford, TX, David Earl Shipman of Fort Worth, TX, Diana Faye Slape of Weatherford, TX, Fay Eugene (Gene) Slape Jr. of Willow Park, TX, Richard Joseph Slape of Fort Worth, TX, two sisters; Lois Peace and Joan Cochran both of Wagoner, OK, three grandchildren; James Eugene Slape and Alexander Joseph Slape both of Willow Park, TX, and Laura Beth Shipman of Spokane, WA, along with many nieces, nephews and many friends. Fay Eugene Slape was preceded in death by his parents, a brother; Richard Slape and a sister; Eula Loftin. A visitation will be held Monday, November 18, 2013 with the family receiving friends from 10:00 AM to 12:30 PM at Clifford D Garrett Family Funeral Home in Fort Gibson. A celebration of Gene’s life will be held Monday, November 18, 2013 at 1:00 PM at the Clifford D Garrett Family Funeral Home Chapel with Chaplain Kevin Webster officiating. Interment will follow at the Fort Gibson National Cemetery. The Family of Fay Eugene “Zoo” Slape has entrusted his services and burial to Clifford D Garrett Family Funeral Home 1224 E Poplar, Fort Gibson, OK 74434, (918)478-2555. Online condolences may be left at clifforddgarrettfamilyfh.com

The family of Fay Eugene Slape created this Life Tributes page to make it easy to share your memories.

Fay Eugene Slape (known by his family as “Zoo”) was born March...

Send flowers to the Slape family.