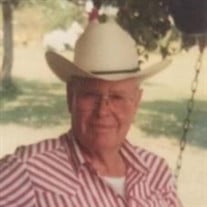 Forrest David Brown, 91, also known as “Uncle Forresty”, a lifelong resident of Fort Gibson passed away on Friday, November 6, 2020. Forrest was born on December 3, 1928 to Charles Brown and Edna Spurlock in the family home where he lived until his passing. He grew up a shy and hardworking farmer. In his lifespan Forrest endured the depression, dust bowl and war years that forever affected his values. He attended school at the Brown school which was named for his father’s family. In April 1954, he was inducted into the United States Army, primarily serving in Germany. Due to his previous experience on the farm, he was one of only a few in his Unit qualified to drive the large transport vehicles. He spoke with pride at being chosen as one of the few men selected to be a member of the Honor Guard for General Patton’s grave. In July 1955, Forrest returned home to help his father on the family farm. For his period of military service, he was awarded the National Defense Service Metal, the Army of Occupation Metal (Germany) and the Good Conduct Medal. Forresty and his dad raised Hereford cattle and Duroc hogs. Forrest told many stories of transporting cattle in a 1-ton truck with sideboards to his Uncle Joe Brown’s packing house in Tulsa. A very young nephew would often accompanied him on these trips. He assisted in maintaining a 3 to 4-acre garden, helping to raise food for his family, while farming hundreds of acres in oats and head feed; he baled thousands of bales of prairie grass, oat straw and alfalfa. Forresty spent most of his life in the saddle of his horse or in the seat of a tractor or a combine. Forrest never married but loved the families of his brothers and sisters. The Brown family was a close family, taking care of and sharing with each other. Forrest shared his love of raising cattle with his sister Janie and her children. Teaching them the ins and outs of the cattle industry and helping her establish her own herd and in his later years still offering advice, when asked. He loved all his nieces and nephews, and especially enjoyed taking them for ice cream cones at Macs Drive In, letting them ride on the stock racks of his old farm truck. When Forresty retired from farming, he loved to visit with the younger guys still driving the tractors and raising the cattle! He had his daily trip to Harps grocery, walking laps in the store, for exercise, then on to Phillips 66, to drink coffee and visit. He developed many friendships there through the years. Forresty’s last selfless act as an Organ Donor impacted several recipients by improving their quality of life. Forresty was preceded in death by his parents, Charles and Edna Spurlock Brown; sisters, Belle Cahoon, Edna Mae Bastianelli, Janie Cook and Helen Castleberry; and his brother, Charles M. Brown. Those left to cherish his memory are his brother, Dan ‘Mickey’ Brown and wife Eunice of Fort Gibson; numerous nieces and nephews, along with a host of extended family and many friends. Funeral services for Forrest will be held 11AM Thursday, November 12, 2020 in the Fort Gibson National Cemetery with Reverend Bill Bailey officiating. Military honors will be observed. Masks are mandatory at cemetery along with social distancing. Honorary pallbearers will be his nephews; Claude Bastianelli, Donald Cook Jr, David Brown, Kelly Cook, Ray Brown, Tom Cook, Tim Cook, Pat Brown, and Justin Cook. The family would like to acknowledge all the support provided by both the Veterans’ Administration, it’s Health Care Staff and Forrest’s Home Health Team that supported his wish to remain at home as long as possible. In lieu of flowers, the family kindly request memorial donations to the First Presbyterian Church @ PO Box 1563 Fort Gibson, OK 74434. The family of Forrest David Brown has entrusted his care, service and burial to Clifford D Garrett Family Funeral Home, Fort Gibson. 918-478-2555. Online condolences may be left for the family at clifforddgarrettfamilyfh.com

Forrest David Brown, 91, also known as &#8220;Uncle Forresty&#8221;, a lifelong resident of Fort Gibson passed away on Friday, November 6, 2020. Forrest was born on December 3, 1928 to Charles Brown and Edna Spurlock in the family home where... View Obituary & Service Information

The family of Forrest D. Brown created this Life Tributes page to make it easy to share your memories.

Send flowers to the Brown family.