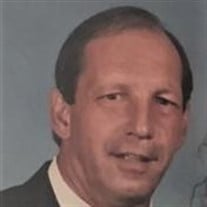 Fred Leon Finley, 75, a lifelong Muskogee resident, was born July 15, 1945 in Muskogee, OK to Samuel Arthur and Madge (Bemo) Finley and peacefully passed away on September 20, 2020 in Muskogee. Fred received his formal education at Muskogee Schools, graduating in 1963 from Muskogee Central High School. He continued his education for two more years at Northeastern State University in Tahlequah, OK. In 1967, he married Linda Lemons in Muskogee, OK and welcomed their daughter, Samantha Lyn. Fred and Linda were married for the next 23 years. After college, Fred went to work for Zachary Construction Company, then moving to the metal piping industry at Wheeler Metals for six years, and then to Grant Prideco, until he retired. From teenage years on, Fred had a deep love for everything that went fast. Much of his free time was spent building engines to go faster. He started as a teenager modifying his Cushman Eagle Scooter, then moved on to super modified stock cars, to blown gas hydroplane race boats, thus, the nickname “Fast Fred”. He was also a member of the Wheeler #88 super modified stock car pit crew for many years. There were numerous cars, motorcycles, dune buggies, and other toys in between. Deep bonds of friendships were born at this time. After years of high-performance engines, Fred graduated to Baja Boats, becoming one of the original “Baja Boys”. Fred always enjoyed coaching or watching his daughter Sammye play softball. From early childhood, Fred has been a member of Eastern Heights Baptist Church in Muskogee, where he enjoyed serving in many capacities. Fred was a notorious jokester, keeping anyone who saw him coming on their toes. In 1999, Fred married Diane Adair of Muskogee, OK. They enjoyed taking trips to Florida with their friends. They enjoyed traveling and taking a trip to California and North Dakota. They spent many weekends at the lake, often taking the grandkids boating or playing on the sea-doos. They loved sitting on the back porch watching the wildlife play. Fred was an OKC Thunder fan and spent many evenings watching their games with Diane. In later years, Fred loved watching his grandchildren play sports, especially soccer and basketball. Fred’s true passion in life was his family. He will be missed by all that knew him. Fred was preceded in death by his parents. Those left to cherish his memory are his wife, Diane of the home; daughter, Samantha French and husband Jimmy of Fort Gibson, OK; step-son, Colby Wilson and wife Jessica of Muskogee, OK; granddaughter, Sunnye French of Fort Gibson, OK; grandson, Tommy French of Fort Gibson, OK; step-granddaughters, Ashton Talley and Brooklynn Wilson both of Muskogee, OK; sisters, Janelle Mercer and husband Jim of Houston, TX; and Aundria Thys and husband J.D. of Ada, OK; step-brother, Frank Morgan of Muskogee, OK; many nieces, nephews, cousins, and many friends. In lieu of flowers, the family request donations in Fred's name to the Alzheimer's Association, 2448 East 81st Street Suite 3000 Tulsa, Oklahoma 74139. (918) 481-7741 or  www.alz.org A memorial service celebrating Fred’s life will be held 11:00AM Saturday, October 3, 2020 at Eastern Heights Baptist Church in Muskogee with Reverend Darren Wallace officiating. The family of Fred Leon Finley has entrusted his cremation and service to Clifford D Garrett Family Funeral Home, Fort Gibson. 918-478-2555. Online condolences may be left at clifforddgarrettfamilyfh.com

The family of Fred L Finley created this Life Tributes page to make it easy to share your memories.

Send flowers to the Finley family.