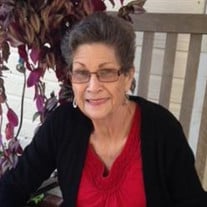 Fredonna Lee “Susie” Johnson, 70, of Muskogee was born November 25, 1948 in Sallisaw, OK to Raymond and Shirley Ann (Holmes) Rogers and peacefully passed away Monday, February 18, 2019 in Tulsa with her family by her side. Susie grew up in Muskogee where she received her formal education. She also graduated from Virgil’s Beauty College. She began her career as a custodian with the Muskogee Public Schools and retired in 2012 from Fort Gibson Public Schools. She was a proud member of the Fraternal Order of Eagles Aerie 4042 in Muskogee where she served as a State Trustee, President of Women’s Auxiliary, and sat on many charity fundraising committees. Susie was an exceptional cook and enjoyed hosting parties. She loved animals, raising money for charities and camping with her Eagle sisters. In her later years, one of her favorite pastimes was playing the domino game “Moon” at the Eagles. Her legacy of love, devotion and hard work are passed on to the most important in her life, her family. She was preceded in death by her father, Raymond Rogers; mother, Shirley Jenkins; husband, Jimmy Johnson; brother, Sonny Rogers; sister, Guyla Fleetwood. She is survived by her daughter; Tosha Brown and husband Pat of Fort Gibson; son, Kurt Beatty of Muskogee; sister, Sandy Laster of Muskogee; brother, Clifford Jenkins of Oklahoma City; granddaughters, Bailey Brown of Fort Gibson, Beth Swinford and husband Ty of Muskogee; grandsons, Trent Brown and Aiden Brown both of Fort Gibson, Kyle Beatty and Kurt Beatty both of Muskogee; great granddaughter, Gracelyn Swinford of Muskogee; niece, Jeanette Fleetwood of Porter; extended family and many friends. A memorial service celebrating Susie’s life will be held 10AM Saturday, February 23, 2019 at the South Ridge Baptist Church in Fort Gibson with Pastors Chris Dover and Glen Little officiating. The family of Fredonna Lee Johnson has entrusted her cremation and memorial service to Clifford D Garrett Family Funeral Home and Cremation Service, Fort Gibson. 918-478-2555 Online condolences may be left at clifforddgarrettfamilyfh.com

The family of Fredonna L. "Susie" Johnson created this Life Tributes page to make it easy to share your memories.

Send flowers to the Johnson family.