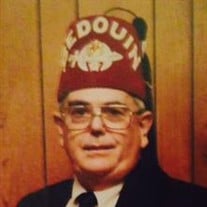 Gary C. Patrick, 78, a native resident of Oklahoma was born March 11, 1938 in Braggs, Oklahoma to Grover C. Patrick and Florence (Byers) Patrick. He was the youngest of 10 children. And passed from this life Tuesday, April 12, 2016 at Hillcrest Hospital in Tulsa, Oklahoma. Gary joined the army in June of 1954 and served until June of 1956. After returning home he met Billye Johnson. In December of 1958 they married and shared over 58 years of life and marriage together. Gary and Billye had a long affiliation with several Baptist Churches in the Muskogee area. He worked with his father-in-law (Willie Johnson) as a pipefitter traveling together as a family to several different states. When Gary and Billye’s daughter reached school age they settled down in Muskogee. Gary worked at RC Cola and later for Wonder Bread making deliveries. After years of working on different delivery routes, Gary wanted more time with his family. He had talent for talking and working with the public so he opened his own Insurance Agency with Farmers Insurance Group. When he began selling insurance in 1975 and later Billye joined him working in the office together helping people. He was also active in the Masonic Lodge and the Bedouin Shrine of Muskogee. He volunteered with the Shriners to drive children to the hospitals in Louisiana and Texas. Worked at several events from parades, basketball tournaments and Bedouin Circus. These events brought Gary the most joy outside of his family. Throughout Gary’s life he received various awards in his business and for the work he did with the Shrine, but the things Gary enjoyed the most was the friendships and joy he saw in others. It was his life’s job to help people in one way or another and the Shriners gave him a way to do what he enjoyed most. Gary is survived by his wife, Billye of the home, daughter; Terry Patrick Dillon and her husband Mark, grandson; Jay Suggs and his wife Kelsey. He is further survived by many nieces, nephews and other relatives and many friends. He was preceded in death by his parents, Grover and Florence Patrick, his father and mother-in-law Willie and Mae Johnson, one sister Maxine Patrick and eight brothers, Raymond, Rex Owen, Jim, Paul, Robert (Tut), Russell (Corky), Richard and Ed Patrick. His family requests that donations be made to Bedouin Shrine Transportation Fund at PO Box 1667 Muskogee, OK 74402. Viewing for Gary will be Sunday April 17, 2016 from 1:00 PM to 6:00 PM at the Clifford D Garrett Family Funeral Home in Fort Gibson. Funeral services for Gary will be held Monday, April 18, 2016 at 10:30 AM at the Clifford D Garrett Family Funeral Home Chapel in Fort Gibson with Chaplain Bill Crow officiating along with Masonic Rites by area Masons. Committal prayers and interment will follow in the Fort Gibson National Cemetery with Mark Brawley, Jimmy Ward, Jim Bushnell, Jay Suggs, Randy Ferguson and Mark Dillon serving as pallbearers. Honorary pallbearers will be Leo Beller, Leroy Gotcher, Ed Howe and Troy Wayne Poteete. American Legion Post 15 will perform Military Honors. The family of Gary C. Patrick has entrusted his services and burial to Clifford D Garrett Family Funeral Home and Cremation Service 1224 E Poplar/PO Box 1973 Fort Gibson, OK 918-478-2555. Online condolences may be left at clifforddgarrettfamilyfh.com

Gary C. Patrick, 78, a native resident of Oklahoma was born March 11, 1938 in Braggs, Oklahoma to Grover C. Patrick and Florence (Byers) Patrick. He was the youngest of 10 children. And passed from this life Tuesday, April 12, 2016 at Hillcrest... View Obituary & Service Information

The family of Gary C Patrick created this Life Tributes page to make it easy to share your memories.

Send flowers to the Patrick family.