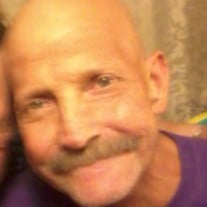 George Michael Stach, 56, was born October 13, 1956 to George and Minnie (Guthrie) Stach in Levelland Texas, and passed away peacefully Tuesday, September 24, 2013 in Muskogee. George was a man of many talents. Having been in the construction business many years, George, was always willing to help his Family, a Friend or a complete stranger with his vast knowledge of carpentry and construction. George grew up in Fort Gibson and attended Fort Gibson Schools. He was an outdoorsman and enjoyed fishing. George loved animals especially his dog “Girlfriend.” He was quick with a smile and handshake, and believed in living life to the fullest. George was affectionately known as “everyone’s pal.” George is survived by his companion; Pat Huddleston of Fort Gibson, daughter; Charri Davis of Keefeton, three brothers; Larry Stach and wife Carol of Fort Gibson, Jug Stach and wife Beverly of Haskell, and Sam Stach and wife Tonya of Fort Gibson, one sister; Betty Hamlin and husband Ron of Jenks, aunts and uncles; Doug McSwain, Lee Hodges, Gerry Smith and husband Sterling, Mary Lou McKissick and husband Joe all of Texas, Linda Yandell and husband Robert of Muskogee, Tommy McKenzie and wife Diana of Fort Gibson; , a grand-daughter; Shiloh Warner of Keefeton, a special niece; Lindsey Collins. Also surviving George are two nieces, seven nephews, his dog; Girlfriend and a host of friends. George was preceded in death by his parents, wife; Donna and sister; Peggy Stach. A memorial service celebrating the life of George Michael Stach will be held Friday, October 4, 2013 at 2PM at the Citizens Cemetery Pavilion in Fort Gibson, with Mr. Butch Cook serving as Eulogist. In Lieu of flowers the family request donations be made to your favorite charity. The family of George M. Stach has entrusted his care and cremation to Clifford D Garrett Family Funeral Home and Cremation Service 1224 E Poplar Fort Gibson, OK. (918) 478-2555. Online condolences may be left at clifforddgarrettfamilyfh.com

George Michael Stach, 56, was born October 13, 1956 to George and Minnie (Guthrie) Stach in Levelland Texas, and passed away peacefully Tuesday, September 24, 2013 in Muskogee. George was a man of many talents. Having been in the construction... View Obituary & Service Information

The family of George M Stach created this Life Tributes page to make it easy to share your memories.

Send flowers to the Stach family.