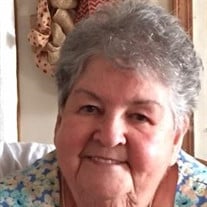 Georgia Bell Waggoner, 85, of Fort Gibson was born October 3, 1933 in Bakersfield, California to Sam and Pansy (Watkins) Hall and passed away Monday, August 19, 2019 in Muskogee with her loving family by her side. She received her formal education in California and graduated from Delayno High School, Delayno, California. Upon graduation she worked in the cotton gin. She met and later married the love of her life John Dewey Smith in 1954 and there were six children born into this marriage, they made their life in California where she worked as a seamstress and homemaker raising her children. She lost her husband while pregnant with Denise living in Twenty-Nine Palms, California. Georgia later met and married her new love Dean Waggoner on December 24, 1976. She worked at the Fort Café, later working at Love’s Country Store as manager and then Harp’s Grocery Store where she earned “Employee of the Month”. Georgia had many jobs and worked very hard to raise her children by herself as a young widowed mother at the age of 29. She sometimes worked two jobs to provide an honest living for her children. Making their clothes, and taking in ironing for others. She loved to garden and can for family. Her children looked forward to her home cooked meals and all the jelly, jams and canning, she loved to make for them. Georgia loved family gatherings and cooking meals for her family. With Georgia’s passion and talent for sewing, she made most of her children’s clothing including wedding dresses for her daughters Denise and Kathy. She would sew for her grandchildren and make beautiful quilts for each grandchild and great grandchildren along with sewing for many others. She was very giving and generous in her giving. Georgia crocheted lap blankets for dialysis patients, hats and scarfs for the homeless as well as crocheting hats for newborns and donating them to the Muskogee Hospital. Danny said that grandma instilled the belief that nothing was given to you, you had to earn everything by working for it, even in love and life. She was a faithful member of New Hope Assembly of God in Muskogee, OK. Georgia is survived by her sons; John Smith and wife Sandy of Fort Gibson, OK, Eddie Smith and his wife Cathy of Temecula, CA; daughters, Natalie Schoemann and husband Joe of Wanette, OK, Kathy Nichols and husband John of Fort Gibson, OK and Denise Hoos and husband Rick of Wagoner, OK; grandchildren, Crystal Johns, Lisa Koumbis, Jerry Tadlock, Andrea Albin, Eddie Smith, Steven Smith, Danny Nichols, T.J. Nichols, Jennifer Markle, Kimberly Condi, John D. Smith, Rocky Ballard, Adam Hart and Joe Michael Schoemann; 22 great grandchildren who were the happiness and joy of her life. She was preceded in death by her parents; husbands; John Dewey Smith and Dean Waggoner; sisters, Billie Hall and Verta Snowden; son, Charles Smith; and great granddaughter Kasey Marie Aley. A visitation will be held 5PM to 7PM Thursday, August 22, 2019 at Clifford D Garrett Family Funeral Home in Fort Gibson, OK. A celebration of Georgia’s life will be held 10:30AM Friday, August 23, 2019 in the Clifford D Garrett Family Funeral Home Chapel with Pastor John Overton officiating. Committal prayers and interment will follow in the Fort Gibson National Cemetery with Jerry Tadlock, John Nichols, Danny Nichols, T.J. Nichols, Rick Hoos and Joe Schoemann serving as casket bearers. Jennifer Markle, Andrea Albin and Kimberly Condi serving as honorary casket bearers. The family of Georgia Bell Waggoner has entrusted her care, services and burial to Clifford D Garrett Family Funeral Home, Fort Gibson. 918-478-2555. Online condolences may be left at clifforddgarrettfamilyfh.com

Georgia Bell Waggoner, 85, of Fort Gibson was born October 3, 1933 in Bakersfield, California to Sam and Pansy (Watkins) Hall and passed away Monday, August 19, 2019 in Muskogee with her loving family by her side. She received her formal education... View Obituary & Service Information

The family of Georgia Bell Waggoner created this Life Tributes page to make it easy to share your memories.

Send flowers to the Waggoner family.