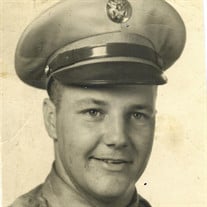 Harold Jay Whitaker, 87, of Fort Gibson, was born May 23, 1934, to Harold and Lucille (Pasley) Whitaker and entered eternal rest surrounded by his family Thursday, April 14, 2022. He grew up in Muskogee, graduated from Muskogee High School, and later joined the United States Army. He was a Paratrooper in the 82nd Airborne. After he was discharged from the Army, he went to NSU and received his bachelor’s degree in Teaching, became a Real Estate Broker and also was a Business Owner of Leisure Pools in Muskogee. He was a lifelong member of Boulevard Christian Church. Jay loved John Wayne, had a knife collection, he was a Scuba Diver Instructor and loved scuba diving, snow skiing, traveling, fishing, working in the yard with his wife, spending time and making memories with family and friends. He was always on the go making his rounds either to help someone, bring you something or just say hi. But most of all, his greatest joy besides being called PaPa was just being with his wife, kids, grandkids and great grandson. Jay leaves behind to cherish his memories his wife, Arlene Whitaker of the home; daughter, Lara Steele and her husband Shawn; son, Chris Keeton and his wife Stephanie; two granddaughters, Nikita Steele, and Skylar Keeton and her fiancé Nate; two grandsons, Darius Steele, and Logan Keeton and his fiancé Emily; one great grandson, Zander Keeton; and several nieces and nephews, extended family and many friends. In lieu of flowers, Harold's family request memorial contributions in his name to Kiamichi Mountains Christian Mission, 37529 Indian Trail, Honobia, OK 74549. Harold’s celebration of life will be held 10:30AM Saturday, April 30, 2022, at Boulevard Christian Church in Muskogee with Pastor Steve Moss officiating. The family of Harold Jay Whitaker has entrusted his care, cremation and service to Clifford D Garrett Family Funeral Home, Fort Gibson. 918-478-2555. Online condolences may be left for the family at clifforddgarrettfamilyfh.com

Harold Jay Whitaker, 87, of Fort Gibson, was born May 23, 1934, to Harold and Lucille (Pasley) Whitaker and entered eternal rest surrounded by his family Thursday, April 14, 2022. He grew up in Muskogee, graduated from Muskogee High School,... View Obituary & Service Information

The family of Harold Jay Whitaker created this Life Tributes page to make it easy to share your memories.

Send flowers to the Whitaker family.