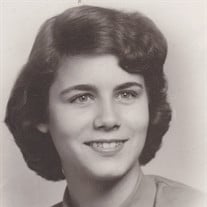 Helen Mae (Nichols) Slape was born June 30, 1936 in Hulbert, Oklahoma to Lonnie Earl Nichols Jr. and Dovie Irene (Montgomery) Nichols and joined her Heavenly Father and husband Fay Eugene Slape on Thursday, October 9, 2014 in Weatherford, Texas at the age of 78. Helen grew up in Oklahoma and married the love of her life, Fay Eugene “Zoo” Slape on June 7th 1958, a marriage that lasted over 55 years until Zoo’s passing on November 13, 2013. Zoo and Helen made their home in Fort Worth, Texas and moved to Weatherford, Texas after Zoo retired. Helen devoted her life to caring for her family, and was a faithful member of the Willow Park Church of Christ. In later life grandchildren were her greatest source of pride and joy. Helen leaves behind to cherish her memory, her five children; Amy Yvonne Shipman of Weatherford, TX, David Earl Shipman of Fort Worth, TX, Diana Faye Slape of Weatherford, TX, Fay Eugene (Gene) Slape Jr. and his wife Amy of Willow Park, TX, and Richard Joseph Slape of Fort Worth, TX, two sisters; Gertrude Peace of Claremore, OK and Leta Mohel of San Antonio, TX, three grandchildren; James Eugene Slape and Alexander Joseph Slape both of Willow Park, TX, and Laura Beth Shipman of Spokane, WA, along with many nieces, nephews and many friends. Helen was preceded in death by her parents and her husband. A visitation will be held Tuesday, October 14, 2014, with the family receiving friends from 9:00 AM to 10:00 AM at Clifford D Garrett Family Funeral Home in Fort Gibson. A celebration of Helen’s life will be held Tuesday, October 14, 2014 at 10:00 AM at the Clifford D Garrett Family Funeral Home Chapel with Brother Mike Shelton officiating. Interment will follow at the Fort Gibson National Cemetery. The family of Helen Mae Slape has entrusted her services and burial to Clifford D Garrett Family Funeral Home 1224 E Poplar Fort Gibson, OK (918)478-2555. Online condolences may be left at clifforddgarrettfamilyfh.com

The family of Helen Mae Slape created this Life Tributes page to make it easy to share your memories.

Send flowers to the Slape family.