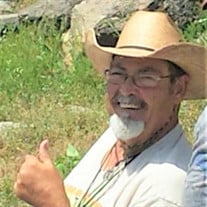 Homer Roy Downey, 67, of Bristow, formerly of Fort Gibson was born May 23, 1951 in Oklahoma City to Floyd and Laura Marie (Brewer) Downey and peacefully passed away Thursday, December 13, 2018 in Tulsa with his loving family by his side. Homer grew up and received most of his formal education in Oklahoma City and Vamoosa before moving to Konawa where he graduated with the class of 69’. He continued his education at East Central University. On December 1, 2013, Homer retired after 41 years at the OG&E power plant as a Unit Operator. On November 21, 2015, Homer married Arla Tallent and made their home in Bristow. Homer was the great outdoorsman. Many hunting trips to Wyoming and Alaska with his family and friends exploring the wilderness and the beauty of God’s creation. He was an avid gun collector who prided himself on his sixshooters, and the nickname Hard Luck Ace. To know Homer was to love him! He was the gentle giant that had a gift to talk. But his pride and joy were his family. The love for his family, God and friends was evident in every facet of his life. He leaves a legacy of love, compassion, and seeing the best in people to live on in his family and many friends. Homer was preceded in death by his parents and the mother of his children, Debra. Those left to cherish his memory are his wife, Arla of the home; children, Sheresa Downey of Fort Gibson, Tony Downey and wife Tina of Fort Gibson, Sarah Adams and husband Rube of Paden, Timmy Downey and wife Leisha of Fort Gibson, Sharla Hepler and husband Matt of Claremore, Raphe Adair and wife Kenzie of Tulsa, Sean Adair of Oklahoma City, and Emilee Adair of Tulsa; grandkids, Brandon Downey, Afton Adams, Shayla Adams, Trent Downey, Justice Johnson, Klaire Downey, Tate Hepler, Zane Hepler, CJ Adams, Sveta Hepler and Zeke Hepler; sisters, Evelyn March of Glencoe, Ruth Duck and husband Roger of Ada; brother, Rex Downey and wife Janice of Chickasha; sister in laws, Wayna Gryder and husband Randy of Henryetta, Nita Tallent of Bristow, and Darla Kelly and husband Dean of Konawa; mother in law, Jane Tallent of Bristow; many nieces, nephews, cousins, extended family and many friends. A memorial service celebrating Homer’s life will be 10:00AM Wednesday, December 19, 2018 at the Timothy Baptist Church in Muskogee with Pastors Kelly Payne and Jason Snyder officiating. Committal prayers and inurnment will follow in the Citizens Cemetery in Fort Gibson with Tony Kuestersteffen, Bill Bottger, Tom Krause and his OG&E Family serving as honorary urn bearers. The family of Homer Roy Downey has entrusted his care, cremation and services to Clifford D Garrett Family Funeral Home, Fort Gibson. 918-478-2555 Online condolences may be left at clifforddgarrettfamilyfh.com

Homer Roy Downey, 67, of Bristow, formerly of Fort Gibson was born May 23, 1951 in Oklahoma City to Floyd and Laura Marie (Brewer) Downey and peacefully passed away Thursday, December 13, 2018 in Tulsa with his loving family by his side. Homer... View Obituary & Service Information

The family of Homer R Downey created this Life Tributes page to make it easy to share your memories.

Homer Roy Downey, 67, of Bristow, formerly of Fort Gibson was...

Send flowers to the Downey family.