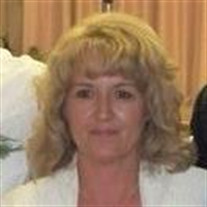 Hope (Ewing/Potter) Cordelia Rohde, was born May 26, 1960 in Durango Colorado to Rodney and Dorothey Ewing and peacefully passed away on Monday, June 5, 2017 in Fort Gibson, Oklahoma while living in Oklahoma with her husband Roger. Hope was... View Obituary & Service Information

The family of Hope Cordelia Rohde created this Life Tributes page to make it easy to share your memories.

Send flowers to the Rohde family.