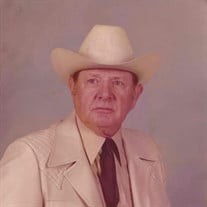 Ira Franklin "Babe" Ross was at his home surrounded by loved ones when he heard God's call Sunday, May 8, 2022. Ira was born November 24, 1924, to Rolandus and Audrey "Bailey" Ross in Cherokee County, Oklahoma. The fourth of six children, he attended school at Muskogee and Ft. Gibson. He married Mollie Vann Glad on December 24, 1942. Getting his start at Camp Gruber, he spent his entire career in the construction business working on projects including the Ft. Gibson Dam. He specialized in building water treatment plants across Oklahoma and Arkansas. Spanning 40+ years, it was his hard work, honesty, dedication, and good-natured personality that led to owning his own construction company until finally retiring due to health reasons. He had a passion for raising good cattle and did just that until a few years ago when his health no longer allowed. He enjoyed hunting trips, especially those involving quail, along with raising and training his bird dogs. From trail riding to the racetrack, Babe enjoyed raising, riding and racing horses. He was a Shriner and a member of the Ft. Gibson Masonic Lodge for 65 years. He loved the Lord and was of the Baptist faith. He was preceded in death by his parents; wife, Mollie; son, Roger; daughter, Mary; one brother, L. R. "Louie"; four sisters, Iris, Rosemary, Ethel, and Ruth Ann; great grandchildren, Chase Conaway and Audra Tucker. He is survived by his sons, Frank Ross and wife, Sue of Ft. Gibson and Mike Ross and wife, Betty of Indianola; daughter in law, DeeDee Ross of Indianola; seven grandchildren, thirteen great grandchildren and four great-great grandchildren; numerous nephews, nieces and many friends. Memorial services will be held 10AM Thursday, May 12, 2022, at the Fort Gibson First Baptist Church with Babe’s son, Reverend Mike Ross officiating. The family of Ira Franklin “Babe” Ross has entrusted his care, cremation and service to Clifford D Garrett Family Funeral Home, Fort Gibson. 918-478-2555. Online condolences may be left for the family at clifforddgarrettfamilyfh.com

Ira Franklin "Babe" Ross was at his home surrounded by loved ones when he heard God's call Sunday, May 8, 2022. Ira was born November 24, 1924, to Rolandus and Audrey "Bailey" Ross in Cherokee County, Oklahoma. The fourth of six children, he... View Obituary & Service Information

The family of Ira Franklin 'Babe' Ross created this Life Tributes page to make it easy to share your memories.

Ira Franklin &quot;Babe&quot; Ross was at his home surrounded by loved...

Send flowers to the Ross family.