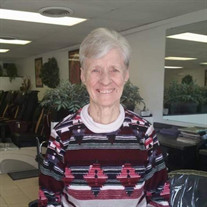 Irene Pearl Rhoades, 88, of Fort Gibson, was born July 14, 1932 in Newport News, Virginia to William and Bertha Torie (Fodre) Weeks and peacefully passed away Thursday, August 20, 2020 in Fort Gibson, OK with her family by her bedside. She married the love of her life, William Roy Rhoades on August 1, 1953 in Alton, Illinois. They shared 55 years of marriage until his passing on February 18, 2008. Irene was a faithful member of the Alton Moose Lodge, in Alton, Illinois and Fieldon United Church of Christ in Fieldon, Illinois. In 2014 she moved to Fort Gibson, to be closer to her son, Bill and daughter in law Debbie. Irene was quite the artist. Many family and friends have tole paintings of hers, where her husband cut the wood and she would paint them. Several of her paintings won awards in Jersey County and Illinois State Fairs. Besides painting, she loved to go bowling and was very good at it. But, her passion was spending time with family and to go riding on the back of Debbie’s Trike Motorcycle to see all their Gold Wing Road Rider friends. Irene is lovingly survived by her son; William “Bill” Edward Rhoades and his wife Debbie of Fort Gibson; grandchildren, Julie Honaker of Greenfield, Illinois, Michael Rhoades and his wife Victoria of Godfrey, Illinois, and Shawn Rhoades and his wife Brandy of Fort Benning, Georgia; great grandchildren, Garrett Buffington of Godfrey, Illinois, Gabrielle Buffington of Jerseyville, Illinois, Gabe Buffington of Greenfield, Illinois, Lucas Rhoades, Cadence Rhoades, Mackenzie Rhoades and Brady Rhoades all of Fort Benning, Georgia; brother, John Weeks of North Carolina; and sister, Mildred Weeks of Florida extended family and many friends. She was preceded in death by her husband and parents. Irene’s wishes were to be cremated and buried with her husband, William at Camp Butler National Cemetery in Springfield, Illinois at a later date. The family of Irene Pearl Rhoades has entrusted her cremation to Clifford D Garrett Family Funeral Home, Fort Gibson, OK. 918-478-2555. Online condolences may be left at clifforddgarrettfamilyfh.com

Irene Pearl Rhoades, 88, of Fort Gibson, was born July 14, 1932 in Newport News, Virginia to William and Bertha Torie (Fodre) Weeks and peacefully passed away Thursday, August 20, 2020 in Fort Gibson, OK with her family by her bedside. She married... View Obituary & Service Information

The family of Irene Pearl Rhoades created this Life Tributes page to make it easy to share your memories.

Send flowers to the Rhoades family.