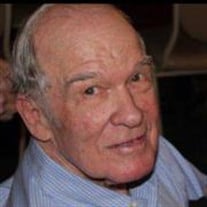 Jackey Leon Huggins, 85, was born January 18, 1930 to James Wallace and Ludy (Thornton) Huggins in Fort Gibson, OK Jack passed from this life on November 30, 2015 in Tulsa, OK surrounded by his family. He met the love of his life, Addylu Stratton at Boatright Store in Fort Gibson, OK. They married in 1952 in Olympia, Washington while Jack was serving in the Army. Their first child, Deborah, was born in Madigan Army Hospital in Fort Lewis, Washington. In 1953, Jack received an honorable discharge and they returned to Oklahoma, then to Baton Rouge, Louisiana for one year. Upon returning to Oklahoma they moved to Stillwater, OK and Jack attended and graduated from OSU College. His first job out of college was teaching at Panola High School near Wilburton, OK. While living there they had their second child, Gary. In 1959 they moved to Latta, OK near Ada where Jack taught for 2 years. In 1962 they moved to Stillwater where Jack worked on an advanced degree. They also had their third child, John. He had subsequent jobs working for the Federal Government in Chandler, Cherokee, Morris and ended his career in Wagoner, OK. He enjoyed hunting, riding horses, showing animals in 4-H, raising hunting dogs, and visiting with his many siblings and playing with his great grandchildren. Jack is survived by his wife Addylu Huggins of the home; daughter; Deborah Huggins of Fort Gibson; sons, Gary and his wife Jan of Wagoner and John and his wife Becky of Langley; grandchildren, Matthew Wilkey and his wife Lindsay of Fort Gibson, Jamie Huggins and his wife Debra, Natalie and her partner Jeff Halfacre of Wagoner, Brent Huggins and his partner Noah of Washington DC, Lindsay and her partner Nick Greer of Texas, Eric Huggins of Wagoner, and Jentri Huggins of Langley; great grandchildren; Jackson, Posey, Conner, Wyatt, Zoey, Shelby, Slayde, Lexy, and Ryan. He is also survived by his siblings; Clarence Huggins of Tulsa, Warren Dean Huggins of Baton Rouge, LA, Sara Preston of Oklahoma City, Carol Tomlinson of Shawnee, and Ann Huggins of Fort Gibson, . Jack was preceded in death by an infant son William Neal, and brothers Deanie Huggins and Bud Huggins. A visitation will be held Sunday, December 6, 2015 in the Clifford D Garrett Family Funeral Home in Fort Gibson, with family receiving friends from 1pm-3 pm. A memorial service celebrating the life of Jack will be held noon, Monday, December 7, 2015 at the Fort Gibson National Cemetery in Fort Gibson, OK, with Chaplain Bob Brewer officiating. The family of Jackey Leon Huggins has entrusted his cremation and services to Clifford D Garrett Family Funeral Home 1224 E Poplar/PO Box 1973 Fort Gibson, OK 918-478-2555. Online condolences may be left at clifforddgarrettfamilyfh.com

Jackey Leon Huggins, 85, was born January 18, 1930 to James Wallace and Ludy (Thornton) Huggins in Fort Gibson, OK Jack passed from this life on November 30, 2015 in Tulsa, OK surrounded by his family. He met the love of his life, Addylu Stratton... View Obituary & Service Information

The family of Jack L. Huggins created this Life Tributes page to make it easy to share your memories.

Send flowers to the Huggins family.