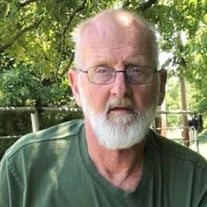 James “Randy” Randell Bennight, 71, of Webbers Falls, OK was born January 10, 1948 in Muskogee, OK to Hubert and Peggy (Childers) Bennight and passed away peacefully Wednesday, December 25, 2019 in Muskogee, OK. Randy graduated from Muskogee Central High School. On December 16, 1966 he enlisted in the United States Navy where he became a Seabee. He served two tours in Vietnam and he was honorably discharged on February 12, 1970. After returning from the navy he opened his own machine shop; Modern Machine. From there he went to work for Chippers Construction and again, later owned his own company B&B services. On July 20, 1973 he married the love of his life Joyce Jobe in Muskogee. Together they spent 46 years 5 months and 5 days together. He was an avid Elk hunter for 38 years, passing on the love of the mountains to his family. Randy was a faithful member of Green Valley Baptist Church in Webbers Falls, OK. He was a huge supporter of the VA hospital in Muskogee and what they provide for all veterans. He was preceded in death by his father; grandparents, Walter and Gladys Bennight and Sue Childers. Randy is lovingly survived by his wife, Joyce of the home; daughter, Mandy Haws and husband Greg of Fort Gibson; sons, Eddie Bennight of Checotah and Danny Bennight and wife Krystal of Council Hill; grandchildren Douglas and Kamren Haws of Fort Gibson, Navy Corpsman Landon Bennight of Camp Lejeune, North Carolina, Greyson and Rylee Bennight of Checotah, Shaylinn and Shane Bennight of Council Hill; mother, Peggy Bennight; sister, Annette Brandon and husband Don all of Porter; brother’s-in-law, Chester Jobe and wife Thelma, Tommy Jobe and wife Gloria and Terry Jobe; sister’s-in-law, Mary Lou Turpen, Carolyn Voss and husband Richard; a very special friend and fellow Vietnam Seabee brother, Terry Turner of Vancouver, Washington; nieces, nephews and many friends. Special thanks to Muskogee VA Hospital doctors and nurses for the level of care Randy received. He was always bragging about how well he was taken care of while visiting there. A committal service will be held 1:00PM Thursday January 2, 2020 at Fort Gibson National Cemetery Pavilion with Chaplain Forrest Kirk officiating. A Memorial Service will follow at 3:00PM Thursday, January 2, 2020 at Green Valley Baptist Church, Webbers Falls, OK with Brother Andy Webb officiating. The family of James Randell Bennight has entrusted his cremation and service to Clifford D Garrett Family Funeral Home, Fort Gibson, OK 918-478-2555 Online condolences may be left for the Bennight family at clifforddgarrettfamilyfh.com

The family of James Randell 'Randy' Bennight created this Life Tributes page to make it easy to share your memories.

Send flowers to the Bennight family.