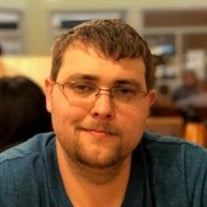 James Matthew Crossland, 30, of Braggs, OK was born October 11, 1986 in Muskogee, OK to Jimmy Crossland and Lisa (Bolen) Gorman and peacefully passed away Monday, March 27, 2017 in Muskogee with his family by his side. Matt grew up in Oktaha, OK where he received his formal education. After graduating he continued at the Indian Capital Vo Tech and received an associate’s degree to be an electrician. Matt met and later married the love of his life, Sherilynn Markcum and they were married on October 10, 2009 in Keefeton, OK. He worked for Fiber Optic in North Dakota before his health declined. He enjoyed fly fishing, hunting and special time with friends. His greatest love was for his family. Matt became a stay at home Dad to raise his son and be the best Daddy ever. Matt is preceded in death by his grandmother, Paula Hamon; grandfather, Jerry Crossland and aunt, Sheri Engelken. Those left to cherish his memories are his wife, Sherilynn of the home; his son, Jayme Crossland of the home; father, Jimmy Crossland and wife Karen of Oktaha, OK; mother, Lisa Gorman of Braggs, OK; sisters, Kelli Crossland of Muskogee, OK and Ashley Wooten of Seminole, OK; grandmother, Willene Crossland of Checotah, OK; grandfather, Ricky Hamon of Martin, OK; many aunts, uncles, nieces, nephews, brother in laws and sister in laws; extended family and many friends. Viewing will be held Thursday, March 30, 2017 from 10AM-7PM at the funeral home. Services will be held 1:00PM Friday, March 31, 2017 in the Keefeton Freewill Baptist Church with Danny Barks officiating. Chris Markcum, Michael Culver, Rodney Chandler, David Crossland, Steve Money, Richard Blanchet, Darren Staley and Andy Aldridge will serve as casket bearers. The family of James Matthew Crossland has entrusted his services and cremation to Clifford D Garrett Family Funeral Home and Cremation Service 1224 E Poplar/PO Box 1973 Fort Gibson, OK 918-478-2555 Online condolences may be left at clifforddgarrettfamilyfh.com

James Matthew Crossland, 30, of Braggs, OK was born October 11, 1986 in Muskogee, OK to Jimmy Crossland and Lisa (Bolen) Gorman and peacefully passed away Monday, March 27, 2017 in Muskogee with his family by his side. Matt grew up in Oktaha,... View Obituary & Service Information

The family of James "Matt" Crossland created this Life Tributes page to make it easy to share your memories.

Send flowers to the Crossland family.