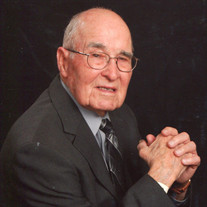 James Clarence Huggins was born June 10, 1921 in Fort Gibson, Oklahoma to James Wallace Huggins and Ludy Angeline (Thornton) Huggins. He died June 12, 2017 from the after effects of a stroke. He attended Fort Gibson schools and later Oklahoma State University Muskogee, receiving an associate degree in agriculture. After graduating from high school, he enlisted in the United States Army Air Force where he served as a supply sergeant in the Pacific arena during World War II. Most of his service was in New Guinea and surrounding islands. After the war, he returned to Fort Gibson where he settled into the life he had chosen many years before as a farmer. His entire life, he sang praises of Fort Gibson his one and only hometown. In 1946, he married his high school sweetheart, Lea Wilma Jones and were married for over 50 years until her death in 1997. Clarence was very active as a member Fort Gibson Church of Christ and his community. At church, he served as a bible class teacher, a deacon and many years as an elder. In later years, he worked in the prison ministry which brought him much joy. He and the Huggins family provided the land on which the church building is now located. He served on the Fort Gibson Public School Board for many years, holding every office and supporting many educational programs throughout his tenure. Clarence Huggins left this earth with a legacy of love and service which has touched the lives of many people. His generosity and good deeds on behalf of others will continue through the lives of all he has touched. Mr. Huggins was preceded in death by his parents; Wallace and Ludy Huggins; grandson, Jason A Lashley; brothers, Laurence Huggins his identical twin brother in 1932, George Eugene “Deanie” Huggins, Jack Huggins and A.L. “Bud” Huggins. He is survived by his daughters; Karen Huggins Lashley Stalcup and husband Steve, Holly Huggins Gambill and husband Royce; son, James Lawrence Huggins and wife Joyce; sisters, Sarah Huggins Preston and husband John, Carol Huggins Tomlinson and Ann Huggins Andrews; brother, Warren Dean Huggins; seven grandchildren and thirteen great grandchildren, all were a joy to his life. Visitation will be 9:00 AM to 7:00 PM Thursday, June 15, 2017 with the family receiving friends from 5:00 PM to 7:00 PM at Clifford D Garrett Family Funeral Home, Fort Gibson, Oklahoma. A Celebration of Clarence’s life will be held 1:00 PM Friday, June 16, 2017 at the Fort Gibson Church of Christ, with Brother Budo Perry and Minister Dan Rouse officiating. Committal prayers and interment will follow at Citizens Cemetery with Ryan Lashley, Nathan Lashley, Matthew Gambill, Zachary Gambill, Joshua Huggins, Jonathan Newberry and Gabriel Laney serving as pallbearers. Paul Rainbolt, Leonard Moore, I.B. Branscum and Lyle Tolbert serving as honorary pallbearers. The family requests donations be made in Clarence’s name to Clarehouse Hospice, Tulsa, Oklahoma or Fort Gibson Church of Christ, Burnt Cabin Christian Camp Scholarship Fund. The family of James Clarence Huggins has entrusted his care, service and burial to Clifford D Garrett Family Funeral Home and Cremation Service 1224 E Poplar/PO Box 1973. Online condolences may be left at clifforddgarrettfh.com

The family of James Clarence Huggins created this Life Tributes page to make it easy to share your memories.

Send flowers to the Huggins family.