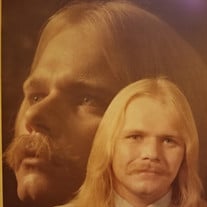 James Joseph Miller, 61, of Fort Gibson was born April 23, 1957 in Fort Worth, Texas to James B. and Sandra Jo (Mitchell) Miller and passed away Tuesday, July 17, 2018 at his home surrounded by his family. He enlisted in the United States Army on May 24, 1974 in Little Rock, Arkansas and was a Diesel Mechanic while serving in the army and received an honorable discharge on May 16, 1977 in Fort Jackson, South Carolina. Jim grew up in Oaks, Oklahoma but has lived in Fort Gibson since 1986. Jim furthered his education and received a Bachelor of Science Degree in Engineering. He was self-employed in engineering and machinery equipment and retired in 2014. Jim had many interests. Through the years, he raced cars and later raised horses, which he said, you couldn’t tune-up. He was a collector of antique military rifles and enjoyed researching each one and could tell you what wars they were used in. His musical tastes ranged from old time gospel, classical, country, rock and roll and even a few rap songs. He had recently “You-Tubed” civil war songs and found several groups that played them. He was a faithful member of the Fraternal Order of Eagles, Aerie 4042 in Muskogee, Oklahoma for many years, where he helped raise money for a host of charities including cancer, diabetes and many more. Jim could design and build all types of machinery and production components. He designed a work-out machine that will lower the bar for you to put the weights on, then lift them to the correct height. He loved spending time with family and friends. He was preceded in death by his parents and brother; Mitchell Harkins of Inverness, Florida. Those left to cherish his memory are his wife of 37 years, Sandra of the home; sisters, Robin McFadden and husband Randy of Great Falls, Montana and Belinda Hardy and husband Terry of Palm Beach Gardens, Florida; mother in law, Thelma Foster of Foster, Oklahoma; nieces, nephews, cousins and many friends. Memorial service 2:00PM Wednesday, July 25, 2018 Fort Gibson National Cemetery Pavilion, Fort Gibson with Mr. Butch Cook officiating. Randy McFadden, Terry Hardy, Bob Alberty, Chester Foster, Jeff Foster and Randy Foster will serve as Honorary pallbearers. The family of James Joseph Miller has entrusted his cremation and service to Clifford D Garrett Family Funeral Home, Fort Gibson. Online condolences may be left at clifforddgarrettfamilyfh.com

James Joseph Miller, 61, of Fort Gibson was born April 23, 1957 in Fort Worth, Texas to James B. and Sandra Jo (Mitchell) Miller and passed away Tuesday, July 17, 2018 at his home surrounded by his family. He enlisted in the United States... View Obituary & Service Information

The family of James J Miller created this Life Tributes page to make it easy to share your memories.

Send flowers to the Miller family.