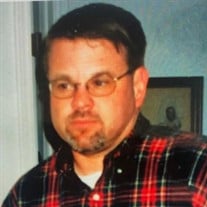 James Sumpter Russell was born December 6, 1964 in Oklahoma City, Oklahoma to Vernie and Margaret (Sumpter) Russell. He passed away Monday, February 14, 2022 at his home in Sherman, Texas. He grew up in Tulsa and graduated from Memorial High School. He completed his education with a Bachelor of Arts in History from the University of Oklahoma. James’s early professional career was in the field of corrections. He was a probation and parole officer for the state of Oklahoma based in Tulsa and a US probation officer based in Little Rock. In the early 2000s, he moved to Texas and began a career in the tech industry starting with Texas Instruments. He remained employed in that field although he worked for a few different tech companies over the years. Approximately seven years ago, he began employment with II-VI Incorporated in Sherman. He was the Manufacturing Manager and loved his job. James was preceded in death by his mother, Margaret, who passed away in 2018. He is survived by his father, Vernie, who lived in Tulsa for 50 years prior to moving to Fort Gibson ten years ago; his sister, Shelley Parker and husband, Brandon; nieces and nephews, Cody and Hope Parris, Madeline Parris and Madison DuPont, Hunter and Kate Parris; grandnephews, Reid and Hudson and grandniece, Sunday Rose, all of Fort Gibson; aunt, Rose Russell of McKinney, Texas; aunt and uncle Thelma and Carl Sumpter of Oglesby, Oklahoma, numerous cousins from both the Sumpter and Russell families; along with many friends. A memorial service is scheduled 10:30AM Saturday, March 5, 2022 at Clifford D Garrett Family Funeral Home Chapel with Brother Justin Kinman officiating. The family of James Russell has entrusted his service to Clifford D Garrett Family Funeral Home, Fort Gibson, OK. 918-478-2555. Online condolences may be left for the family at clifforddgarrettfamilyfh.com

James Sumpter Russell was born December 6, 1964 in Oklahoma City, Oklahoma to Vernie and Margaret (Sumpter) Russell. He passed away Monday, February 14, 2022 at his home in Sherman, Texas. He grew up in Tulsa and graduated from Memorial High... View Obituary & Service Information

The family of James S. Russell created this Life Tributes page to make it easy to share your memories.

Send flowers to the Russell family.