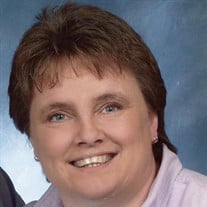 Janie Lynn Wade, 53, was born August 28, 1963 in Pryor, OK to Boyce Eugene and Alice Faye (Shipp) Rudd and entered Heaven’s Gates on Thursday, January 19, 2017 at her home in Fort Gibson, OK. Janie grew up in Pryor where she attended school. She married her best friend Tom Wade in Salina, OK on June 24, 1989 and together they made their home in Fort Gibson. Janie continued her education at Northeastern State University receiving her Masters in Education and Masters in Science of Licensed Professional Counselor. She taught Comp I and II, Psychology, Creative Writing and English Writing Lab at NSU. She and Tom were very active and loved to travel and camp. An annual trip to Colorado to ride four wheelers and snowmobiles, camp in the back country, and sleep under the stars was she and Tom’s passion. Janie is preceded in death by her father, Boyce Eugene Rudd; grandparents, William Thomas and Janie (McCauland) Rudd, and Oyed and Mae (McCarty) Shipp. She is lovingly survived by her husband, Tom of the home; mother, Faye Rudd of Pryor, OK; sisters, Jeanie Rudd of Collinsville, OK and Shellie Willoughby and husband Richard of Guthrie, OK; nephew, Andrew Willoughby of Guthrie, OK; brother and sister in law, Ed and Judy Wade of Sand Springs, OK; brother and sister in law, Mike and Kay Wade of Mannford, OK her dog Scout and cat Vixie and many friends. In lieu of flowers, Janie's family request donations be made in her name to St Judes Children's hospital @ 800-805-5856 or stjude.org/donate. A memorial service celebrating Janie’s life will be held 11:00AM, Friday, January 27, 2017 in the Crescent Valley Baptist Church with Chadd Pendergraft officiating. The family of Janie Lynn Wade has entrusted Clifford D Garrett Family Funeral Home and Cremation Service 1224 E Poplar Fort Gibson, OK with her arrangements. Online condolences may be left at clifforddgarrettfamilyfh.com

The family of Janie Lynn Wade created this Life Tributes page to make it easy to share your memories.

Send flowers to the Wade family.