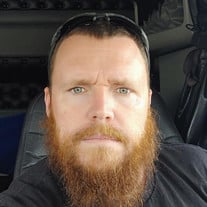 Jason D. Cornelius passed away on September 4, 2021, after fighting Covid for 29 days. He was born on March 16, 1984, in Tulsa, Oklahoma. Jason grew up in Sand Springs and Skiatook, Oklahoma and graduated from Skiatook High School. He also studied diesel mechanic at Tulsa Technology Center. He later enlisted in the United States Army and proudly served his country from 2003-2007. Jason was stationed at Fort Stewart, Georgia with 3rd ID 6-8 Cav and spent 13 months in Iraq. He was a man with many hobbies and passions that included rock crawlin, building badass stuff with his dad, welding, huntin, fishin, and of course his motorcycle. He also had a love for 18-wheelers and was a true trucker, not just a steering wheel holder. He was a member of the Combat Veterans Motorcycle Association and a supporter of helping other veterans. On March 7, 2006, he married Abby and they had three beautiful and unique children: Briar (14), Tanner (12), and Athena (5). Most importantly, Jason loved his family more than life itself. He was a devoted husband, father, son, brother, and friend. You could always count on Jason to take the time to help those he loved or even a stranger. Throughout his life, Jason was a man who had the power to inspire greatness in those around him. Or sometimes he could drive you to drink. He loved the outdoors and spending time with his dad in the shop and occasionally loved to sit and play on his PlayStation with his boys. He sometimes struggled with his demons but at the end of the day overcame them and was a stronger person because of it. It didn’t take much to become attached to him. Just hearing his “Elmer Fudd” laugh was enough to light up the darkest of moods, it was truly hard not to love him. Those left to cherish his memory are his wife Abby Noel Cornelius; children, Thomas Briar Cornelius, Tanner Brayden, and Athena Briseis Cornelius; parents, Donnie Joe Cornelius and Rhonda Lou Cornelius, brothers, Jeremy Don Cornelius and wife Cayla, and Jake Dillion Cornelius, nephews, nieces, and a host of other family members and many friends. Jason is preceded in death by maternal grandfather, Toney Beaver and paternal grandmother, Verna Cornelius. A visitation for Jason will be held Wednesday, September 15, 2021 at Clifford D Garrett Family Funeral Home in Fort Gibson with family receiving friends 9:00AM-9:30AM. Funeral services are scheduled for 10:00AM Wednesday, September 15, 2021 at Fort Gibson National Cemetery with his Family officiating. Full military honors will be observed. The family of Jason D. Cornelius has entrusted his care, services and burial to Clifford D Garrett Family Funeral Home, Fort Gibson. 918-478-2555. Online condolences may be left at clifforddgarrettfamilyfh.com

Jason D. Cornelius passed away on September 4, 2021, after fighting Covid for 29 days. He was born on March 16, 1984, in Tulsa, Oklahoma. Jason grew up in Sand Springs and Skiatook, Oklahoma and graduated from Skiatook High School. He also studied... View Obituary & Service Information

The family of Jason Duane Cornelius created this Life Tributes page to make it easy to share your memories.

Jason D. Cornelius passed away on September 4, 2021, after fighting...

Send flowers to the Cornelius family.