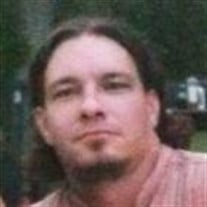 Jason Lee Ragsdale, 36, passed away Sunday, June 21, 2015, as a result of injuries sustained from an accident. Jason, also known as “Bo”, was born May 3, 1979, in Norman, OK, and was a lifelong resident of Fort Gibson. He worked in construction after attending Fort Gibson High School. Jason had many titles; son, grandson, brother, uncle, cousin, nephew, and friend. He enjoyed sports and nature. He was competitive and compassionate. He had a soft heart protected by his tough spirit. Jason loved working with his hands and he had many carpentry skills. He could also draw very well and do many crafts by hand such as dream catchers and beadwork among many more. Jason being Cherokee and very proud of his native heritage, reflected in his artwork and his daily life. He loved a good Pow wow or spending a lazy day with his family and friends. Money or material things were not his treasures. Jason was “real”, he was tough, but also loving. He was a hard worker and independent. His smile was contagious and can be seen on all his children’s faces. We hope that you carry his smile with you and smile back for he is not here, he has been set free. Jason is survived by his children; Chloe, Madison, Gage, and Haley, his mother; Penny Ragsdale, father and step-mother; Charlie and Christine Ragsdale, sister; Sabrina Ragsdale, step-brother; Dustin Moore, step-sisters; Amanda and Emily Moore, paternal grandmother; Mary Ragsdale, nieces; Jasmine and Ravin Ragsdale, Daisy, Daliah, Sarena, and Michaela Dever, and numerous uncles, aunts, and cousins and many friends. Jason was preceded in death by his grandmother; Verta Snowden, grandfather; Billy Ragsdale, Uncle; Raymond Ragsdale, and cousin; Shannon Ragsdale. A celebration of Jason’s life will be held at Fort Gibson Church of Christ on Friday, June 26, 2015, at 1:00PM with the Reverend Don Reed officiating. Interment and committal prayers will follow at Citizens Cemetery with Jeremy Ragsdale, Robert Bolding, Billy Ragsdale III, James Swafford Jr., Dustin Moore, and Gerardo Sanchez serving as casket bearers. The family of Jason Lee Ragsdale has entrusted his services and burial to Clifford D Garrett Family Funeral Home and Cremation Service 1224 E Poplar/PO Box 1973 Fort Gibson, OK 918-478-2555. Online condolences may be left at clifforddgarrettfamilyfh.com

The family of Jason Lee Ragsdale created this Life Tributes page to make it easy to share your memories.

Send flowers to the Ragsdale family.